Here it comes again. As the enemies of peace continue to pressure a new US President into deeper war commitments overseas, and as Washington’s Deep State works relentlessly opposing Russian moves in Syria at every turn, the war drums have started again – beating harder than ever now, clamouring for a new US-led attack on Syria. This morning we saw the familiar theme emerge, and just in time to provide a convenient backdrop to this week’s Brussels’ ‘Peace Talks’ and conference on “Syria’s Future”.

The US-led ‘Coalition’ prepares to make its end-run into Syria to ‘Retake Raqqa,’ and impose its Safe Zones in order to partition Syria, more media demonization of the Syrian government appears to be needed by the West.

On cue, the multi-billion dollar US and UK media machines sprung into overdrive this morning over reports based primarily from their own ‘activist’ media outlets.  Aleppo Media Center and others embedded in the Al Nusra-dominated terrorist stronghold of Idlib, Syria, alongside their media counterpart the UK-based Syrian Observatory for Human Rights (SOHR) funded by the UK and EU, are all now claiming that the Syrian and Russian Airforces have launched a chemical weapons airstrike killing civilians in Idlib.

In their report today entitled, “Syria conflict: ‘Chemical attack’ in Idlib kills 58”, the BBC is also alleging in their report that Sarin gas was used.

The alleged “chemical airstrikes” are said to have taken place in the town of Khan Sheikhoun, about 50km south of the city of Idlib.

Predictably, the BBC and other similar reports by CNN, have triggered a wave of ‘consensus condemnation’ and indignation by the usual voices, the UN’s Staffan de Mistura, Francois Hollande, and, of course, UK Foreign Secretary Boris Johnson, who said that President Bashar al-Assad “would be guilty of a war crime” if it somehow be proven that his ‘regime’ was responsible.

“Bombing your own civilians with chemical weapons is unquestionably a war crime and they must be held to account,” he said (reported by BBC).

But is the mainstream media’s version of events what actually happened?

The BBC claims in their article that, “Opposition activists said Syrian government or Russian warplanes carried out the strikes.”  This claim should be checked against any Russian air sorties scheduled for the same period. As of this morning, Russia’s defence ministry has stated that it had not carried out any air strikes the area.

The problem here is that the BBC and others are not only taking ‘opposition activists’ reports of a chemical attack at face value, they are also elevating claims that the Syrian and Russian airforces were then later hitting the medical clinics who were treating the survivors:

Expectedly, as with past claims of “chemical attacks,” the notorious US-UK funded ‘NGO’, the White Helmets have already played a central role in scripting the narrative for this latest chemical attack.

As with so many other previous reports on Syria, the BBC, CNN and AP’s reporting relies exclusively on “opposition activists” and “opposition media agencies,” including the ‘pro-opposition’ Step News agency’, the Edlib Media Center (EMC), and ‘opposition journalists’ like photographer Hussein Kayal, as well as an unnamed “AFP news agency journalist”.

The unnamed “AFP journalist” is particularly interesting, as it seems to be the source of a key portion of the BBC’s version of events:

“An AFP news agency journalist saw a young girl, a woman and two elderly people dead at a hospital, all with foam still visible around their mouths.”

The journalist also reported that the same facility was hit by a rocket on Tuesday afternoon, bringing down rubble on top of doctors treating the injured.”

However, as you read further down the BBC report, the story gets less certain, as the story becomes very loose:

“The source of the projectile was not clear, but the EMC and the opposition Local Co-ordination Committees (LCC) network said warplanes had targeted several clinics.”

After their source the SOHR refused to say which “chemical” was supposedly dropped, the BBC quickly moved in to fill in the blanks by framing the story that the Syrian-Russian Airforces had launched a “Sarin Attack”.

“The SOHR said it was unable to say what exactly was dropped. However, the EMC and LCC said it was believed to be the nerve agent Sarin, which is highly toxic and considered 20 times as deadly as cyanide.” 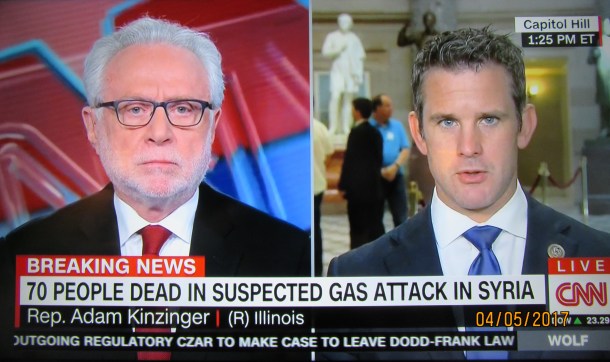 At no point in its reporting does the BBC ever express any skepticism that maybe their ‘activist’ sources could be providing false or misleading information. Ultimately, these reports can be used to trigger renewed calls by Western officials for military strikes against the ‘Syrian Regime’ – which was exactly what happened today after these news stories were circulated. Within a few hours after these reports circulated, Congressman Adam Kinzinger (R, Illinois) came on CNN with Wolf Blitzer who asked Kinzinger point blank: What can be done to remove this regime? Kinzinger then replied by calling outright for US airstrikes to “Take out the Assad Regime in Syria”, including “cratering their airstrips so no planes can take off” and creating a “No Fly Zone” over Syria.

These statements, as bombastic as they may sound, are serious and should not be taken casually. The problem is they are based on a series of lies. Of course, Kinzinger was followed on-air by John McCain protesting against US Secretary of State Rex Tillerson’s recent comments this week that, “The Syrian people should be able to choose their own (political) future” – effectively holding the overwhelming majority of Syrian in contempt for supporting their government.

CNN Senior Middle East correspondent Arwa Damon also chimed in with Blitzer from New York, and without any real evidence presented as to what has happened and who is to blame, she swiftly concluded that the Idlib “chemical attack” was the work of ‘the regime’ and that America cannot stand back idly and do nothing, and how this would show a “lack of humanity,”

The BBC does briefly mention an alternative report, but carefully tried to discredit it in the court of political opinion by labelling it as from “Pro-Government journalists,” stated here:

“Pro-government journalists later cited military sources as saying there had been an explosion at an al-Qaeda chemical weapons factory in Khan Sheikhoun that was caused either by an air strike or an accident.”

As expected, the UN affiliated chemical weapons watchdog, the OPCW, quickly announced they were “seriously concerned” about the alleged chemical attack, and that they were now “gathering and analysing information from all available sources”. One hopes that this will entail more than just looking at ‘activist’ or White Helmets material being circulated on the US and western media.

Incredibly, Kinzinger also said on national TV with CNN that people should ignore any stories which DO NOT implicate the Syrian government waged chemical attacks against its own people in East Ghouta in 2013 – and that these should be dismissed as “fake news” put out by ‘the Russians and the FSB.’ By this statement, Kinzinger is essentially saying that award-winning American journalists Seymour Hersh and Robert Parry are akin to being  Russian agents. In fact, Kinzinger is wrong and lying in his capacity as a high-ranking House Committee member. 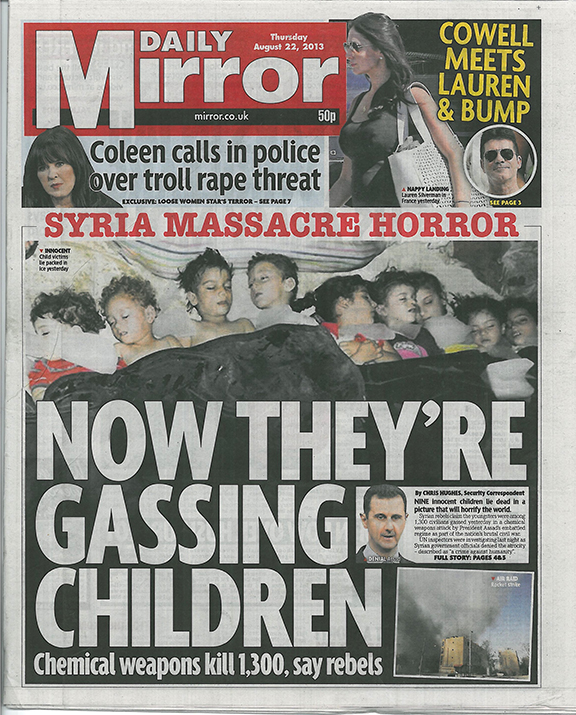 In 2013, the US and UK went on an all-out propaganda blitz to try and implicate the Syrian Government in advance of war votes in both Washington and London. The campaign failed.

The following are links to a small sample of factual reports publicly available which clearly show that the alleged “Sarin Attack” in 2013 was in fact the work of western and Gulf-backed ‘opposition rebels’ (terrorists) and not the Assad government, and all of these reports have been more or less ignored by CNN, BBC and the entirety of the western mainstream media – because they do not fit into the western ‘regime change’ and US-led military intervention narrative:

They don't give up,the scum in the Media over here are hysterical,their default position is to blame Russia and Assad no matter what the facts are,I hope Russia has those S-400s installed,those Reich bastards might just try something stupid,Trump is making all the wrong noises.

Russia and China should draw the line in Syria...it is now clear that hope (when it comes to the JEWest) is a dangerous delusional feeling. It took just a few weeks to turn Trump into a pathetic Cuck, that's how hopeless the JEWest is.

Only one day after Assad agreed to telephone conference with Trump, the gas attack occurs.

Nobody can convince me that Assad did it.   Someone did it who wants to prevent that conference.

So who might that be?    Saudis and Israeli leaders are the ones who would want that to happen.

Assad would NEVER ruin an opportunity to change the situation between him and the US government.

They don't give up,the scum in the Media over here are hysterical,their default position is to blame Russia and Assad no matter what the facts are,

Only one day after Assad agreed to telephone conference with Trump, the gas attack occurs.

Nobody can convince me that Assad did it.   Someone did it who wants to prevent that conference.

So who might that be?    Saudis and Israeli leaders are the ones who would want that to happen.

Assad would NEVER ruin an opportunity to change the situation between him and the US government.

Correct but their credibility is zero at this point in times.

Logical and I agree. They kikey machine is trying to make Trump the bad guy.

The Syrian War is only a ploy to bring down Trump for now. The US Civil War rages.

Russia and China should draw the line in Syria.

Losing that front moves the battle onto their soil.

Plenty of turkish regulars for man power and they're cheaper by the dozen.

Trump has no control over the israelis use of mercenaries. He is being jewed but i think he knows it and will act when he sees the opening.

At no point in its reporting does the BBC ever express any skepticism that maybe their ‘activist’ sources could be providing false or misleading information.

Kikey will take away their crumpets. Even the British have has it with matzoh.