Hitler Deserted the Reich in 1945, and lit out for Argentina!

The photo above, allegedly taken in Chile, shows Adolf Hitler when he was over 90 years old, he died in Mendoza Argentina in December 1985, where he had spent forty years after fleeing the Reich in 1945, protected by the local Sephardic Jewish community and the Nazi SS.

Hitler was a grandson of Barron Salomon Mayer Rothschild of Vienna, he was buried in a public cemetery in Palmero, 30 Miles southeast of Mendoza, he left many paintings.

Hanna Reitsch landed her Fieseler Fi 156 Storch in the Tiergarten near the Brandenburg Gate, 26 April 1945, departing in a down wind take off 28 April, she had on board passengers Adolph Hitler and Eva Braun, whom she flew to Jugoslavia then under the military governorship of Sepp Deitrich head of the Waffen SS, where they remained until 1947 before taking regular sea passage to Argentina. 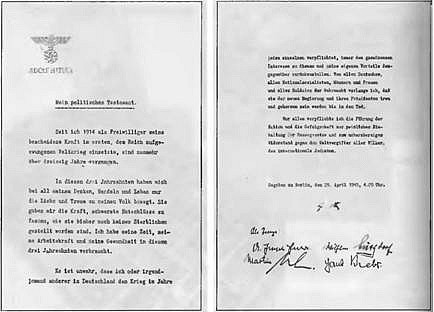 More than thirty years have passed since 1914 when I made my modest contribution as a volunteer in the First World War, which was forced upon the Reich. In these three decades love and loyalty to my people have guided all my thoughts, actions and my life. They gave me the strength to make the most difficult decisions ever to confront mortal man. In these three decades I have spent my strength and my health.

It is untrue that I or anyone else in Germany wanted war in 1939. It was wanted and provoked solely by international statesmen either of Jewish origin or working for Jewish interests. I have made too many offers for the limitation and control of armaments, which posterity will not be cowardly enough always to disregard, for responsibility for the outbreak of this war to be placed on me.

Nor have I ever wished that, after the appalling First World War, there would ever be a second against either England or America. Centuries will go by, but from the ruins of our towns and monuments the hatred of those ultimately responsible will always grow anew against the people whom we have to thank for all this: international Jewry and its henchmen.

Only three days before the outbreak of the German-Polish war I proposed a solution of the German-Polish problem to the British Ambassador in Berlin - international control as in the case of the Saar. This offer, too, cannot be lied away. It was only rejected because the ruling clique in England wanted war, partly for commercial reasons and partly because it was influenced by the propaganda put out by international Jewry.

I have left no one in doubt that if the people of Europe are once more treated as mere blocks of shares in the hands of these international money and finance conspirators, then the sole responsibility for the massacre must be borne by the true culprits: the Jews.

Nor have I left anyone in doubt that this time millions of European children of Aryan descent will starve to death, millions of men will die in battle, and hundreds of thousands of women and children will be burned or bombed to death in our cities without the true culprits being held to account, albeit more humanely.


After six years of war which, despite all setbacks, will one day go down in history as the most glorious and heroic manifestation of the struggle for existence of a nation, I cannot abandon the city which is the capital of this Reich. Since our forces are too meager to withstand the enemy's attack and since our resistance is being debased by creatures who are as blind as they are lacking in character,

I wish to share my fate with that which millions of others have also taken upon themselves by remaining in this city. Further, I shall not fall into the hands of the enemy who requires a new spectacle, presented by the Jews, for the diversion of the hysterical masses.

I have therefore decided to stay in Berlin and there to choose death voluntarily when I determine that the position of the Fuhrer and the Chancellery itself can no longer be maintained. I die with a joyful heart in the knowledge of the immeasurable deeds and achievements of our peasants and workers and of a contribution unique in the history of our youth which bears my name.

That I am deeply grateful to them all is as self-evident as is my wish that they do not abandon the struggle but that, no matter where, they continue to fight the enemies of the Fatherland, faithful to the ideals of the great Clausewitz.


Through the sacrifices of our soldiers and my own fellowship with them unto death, a seed has been sown in German history that will one day grow to usher in the glorious rebirth of the National Socialist movement in a truly united nation. Many of our bravest men and women have sworn to bind their lives to mine to the end. I have begged, and finally ordered, them not to do so but to play their part in the further struggle of the nation.

I ask the leaders of the Army, the Navy and the Air Force to strengthen the National Socialist spirit of resistance of our soldiers by all possible means, with special emphasis on the fact that I myself, as the founder and creator of this movement, prefer death to cowardly resignation or even to capitulation.

May it become a point of honor of future German army officers, as it is already in our Navy, that the surrender of a district or town is out of the question and that, above everything else, the commanders must set a shining example of faithful devotion to duty unto death.

Before my death, I expel former Reichs-Marshal Hermann Goring from the party and withdraw from him all the rights that were conferred upon him by the decree of 29 June, 1941 and by my Reichstag statement of 1 September, 1939. In his place I appoint Admiral Donitz as President of the Reich and Supreme Commander of the Armed Forces.

Apart altogether from their disloyalty to me, Goring and Himmler have brought irreparable shame on the whole nation by secretly negotiating with my enemy without my knowledge and against my will, and also by attempting illegally to seize control of the State.

In order to provide the German people with a government of honorable men who will fulfill the task of continuing the war will all the means at their disposal, I, as Fuhrer of the nation, appoint the following members of the new cabinet:


Although a number of these men, including Martin Bormann, Dr Goebbels and others together with their wives have joined me of their own free will, not wishing to leave the capital under any circumstances and prepared to die with me, I implore them to grant my request that they place the welfare of the nation above their own feelings.

By their work and loyal companionship they will remain as close to me after my death as I hope my spirit will continue to dwell among them and accompany them always. Let them be severe but never unjust and let them never, above all, allow fear to preside over their actions, placing the honor of the nation above everything that exists on earth.

May they, finally, always remember that our task, the consolidation of a National Socialist state, represents the work of centuries to come, so that every individual must subordinate his own interest to the common good. I ask of all Germans, of all National Socialists, men and women and all soldiers of the Wehrmacht, that they remain faithful and obedient unto death to the new government and its President.

Above all, I enjoin the government and the people to uphold the race laws to the limit and to resist mercilessly the poisoner of all nations, international Jewry.

Of 30,000 Germans sentenced to death by Nazi Germany's military courts during the Second World War, more than 15,000 were executed for deserting the ranks of the Wehrmacht.

Why didn't the Jews (Nazi hunters) come after them?

Adolf Hitler and all of the senior Nazis were Jews, Ernst Rohm and the SA hierarchy the non Jewish Nazis, whose Zionist financed wickedness and thuggery brought H to power, were liquidated in the Night of the Long Knives Massacre of June 1934, after H was sworn in as German Chancellor January 31, 1933. 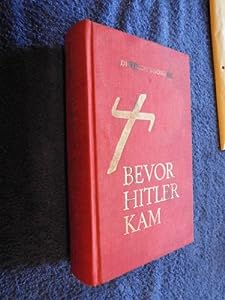 The following tract, which was banned in Germany as soon as it appeared, is the main source for the claim Hitler and the Nazis were Jews.

The Leader and Reichschancelor Adolf Hitler.

Reichsleader of the NSDAP Gregor Strasser.

Von Keudell II, all of whom were active in the destruction of Jews.

The Communist / Bolshevik, movement completely devised and executed by Jewish master minds, or partly Jewish like Lenin, to full Jewish like so many of the Secret Police Chiefs, all the way to Marx & Trosky, as well the entire Nazi movement was Jew or half Jew! .. Dietrich Bronder was a German Jew.

Sever Plocker  @ Ynet News assures us things were much the same in the Soviet Union - Stalin's Jews: We mustn't forget that some of greatest murderers of modern times were Jewish .. Stalin's Jews - Israel Opinion, Ynetnews

even if hitler were a child of the rothschilds; they were not obligated to hide him, they could have killed him.

your story is false and worthless.