USS Liberty was attacked in international waters by Israeli forces on June 8, 1967, killing 34 Americans and wounding another 174, in a false flag attack that was allegedly to be blamed on Egypt, to precipitate US military response against that country. US forces were ordered by then US President Lyndon Baines Johnson not to retaliate against Israel. USS Liberty Memorial

At the end of July, 2002, the governmental commission for  investigation of the "Kursk" submarine accident finished its work, and  its head, Ilya Klebanov, announced its findings, officially putting the  "Kursk" incident to rest. So the official version has been stated: an  exploding torpedo inside the sub is what caused the disaster.

Well, anyone who carefully followed the "Kursk" tragedy here in Russia  knows that this official governmental story is a complete falsehood.  Since the tragedy there have been many unofficial publications published  in Russia shedding light on the matter, some of which we at the  Orthodox Anti-Globalist Resource Center intend to translate and make  available in English.

As you probably remember, the nose of the "Kursk", was sawn off before  the sub was raised, allegedly to avoid the possibility of an explosion  during transport. Skeptics claimed that the government was really trying  to leave the evidence for the real cause of the disaster on the ocean  floor.

Their suspicions were increased by the fact that no pictures of the  sub's nose were ever shown to the public. It's possible that the nose of  the sub was completely undamaged, for example, which would destroy the  government's official explanation of the disaster.

But the official cover-up went awry when the sub was finally raised, for  there, for all to see, was a perfectly round hole on the sub's hull,  just at the point where the nose had been sawn off, apparently they  sawed in the wrong place. This hole was bent in at the edges, and could  only have been caused by impact of an external object traveling at an  extremely high speed.

This article, which appeared in Russky Vestnik  last November, written by one of that publication's readers, will take  up the story from here...

Detail from the above diagram based on the reports of Norwegian divers assisting the Russians, a gash runs up across the top of the hull into the sail, where there was an escape pod which could have carried the entire Kursk crew to safety, but it was disabled by the damage to the sail.

The mission began in earnest on the morning of August 12, 2000. As part  of the exercise, Kursk was to fire two dummy torpedoes at a Kirov-class  battlecruiser. At 11:28 local time (07:28 UTC), high test peroxide  (HTP), a form of highly concentrated hydrogen peroxide used as  propellant for the torpedo, seeped through rust in the torpedo casing.  The HTP reacted with copper and brass in the tube from which the torpedo  was fired, causing a chain reaction, leading to a chemical explosion.

The watertight door separating the torpedo room from the rest of the sub  was left open prior to firing. This was apparently common practice, on  account of excess compressed air being released into the torpedo room  when a weapon was fired. The open door allowed the blast to rip back  through the first two of nine compartments on the huge sub, probably  killing the seven men in the first compartment, and at least injuring or  disorienting the thirty-six men in the second compartment.

After the first explosion, due to the fact the air conditioning duct was  quite light, the blast wave traveled to more compartments, including  the command post filling them with smoke and flames. After the  explosion, the captain was believed to be trying to order an ‘emergency  blow’ which causes the sub to rapidly rise to the surface, but he was  quickly overcome with smoke.

An emergency buoy, designed to release from a submarine automatically  when emergency conditions such as rapidly changing pressure or fire are  detected and intended to help rescuers locate the stricken vessel, also  failed to deploy. The previous summer, in a Mediterranean mission, fears  of the buoy accidentally deploying, and thereby revealing the sub’s  position to the US fleet, had led to the buoy being disabled.

Two minutes and fifteen seconds after the initial eruption, a much  larger explosion ripped through the sub. Seismic data from stations  across Northern Europe show that the explosion occurred at the same  depth as the sea bed, suggesting that the sub had collided with the sea  floor which, combined with rising temperatures due to the initial  explosion, had caused further torpedoes to explode. 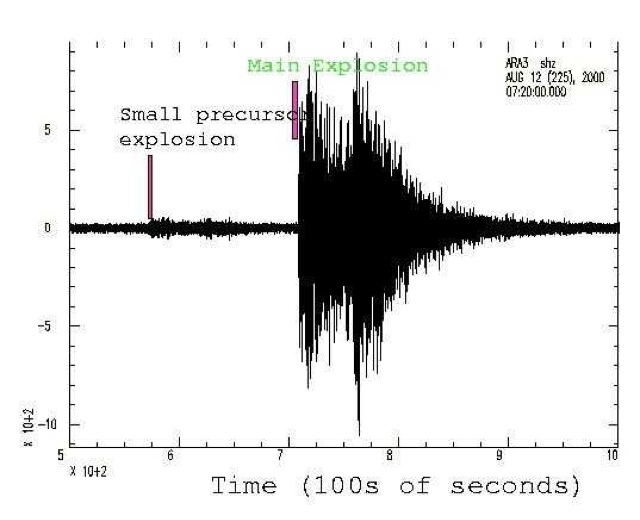 The second explosion was equivalent to 3–7 tons of TNT, or about a  half-dozen torpedo warheads and measured 3.5 on the Richter scale. After  the second explosion, the nuclear reactors were shut down to prevent a  nuclear disaster, although the blast was almost enough to destroy the  reactors.

The second explosion ripped a two-metre-square hole in the hull of the  craft, which was designed to withstand depths of 1000 meters. The  explosion also ripped open the third and fourth compartments. Water  poured into these compartments at 90,000 litres per second – killing all  those in the compartments, including five officers from 7th SSGN  Division Headquarters. The fifth compartment contained the ship’s  nuclear reactors, encased in a further five inches of steel.

The bulkheads of the fifth compartment withstood the explosion, causing  the nuclear control rods to stay in place and prevent nuclear disaster.  Western experts have expressed strong admiration for the Soviet/Russian  engineering skill to create a submarine that withstood so much.

Twenty-three men working in the sixth through to ninth compartments  survived the two blasts. They gathered in the ninth compartment, which  contained the secondary escape tunnel, the primary tunnel was in the  destroyed second compartment.

Captain-lieutenant Dmitri Kolesnikov, one of three officers of that rank  surviving appears to have taken charge, writing down the names of those  who were in the ninth compartment. The pressure in the compartment at  the time of the explosion was the same as that of the surface.

Thus it would be possible from a physiological point of view to use the  escape hatch to leave the submarine one man at a time, swimming up  through 100 metres of Arctic water in a survival suit, to await help  floating at the surface. It is not known if the escape hatch was  workable from the inside – opinions still differ about how badly the  hatch was damaged.

However it is likely that the men rejected using the perilous escape  hatch even if it were operable. They may have preferred instead to take  their chances waiting for a rescue vessel to clamp itself onto the  escape hatch.

It is not known with certainty how long the remaining men survived in  the compartment. As the nuclear reactors had automatically shut down,  emergency power soon ran out, plunging the crew into complete blackness and falling temperatures.

The Russian Navy leadership, in the  first days after the accident, claimed they had contact with  survivors on board the submarine, a week after the explosions the Russian Navy still claimed there was the  possibility of survivors, Dimitry Kolesnikov and 22 others had survived the initials blasts, and then drew back to the  ninth compartment, they only survived for eight hours and were finally killed by the equipment that was meant to save them.

Update: Quite clearly since the dent in the hull goes inwards the submarine was impacted by something from the outside, as well there is no evidence that the forward section has been sawed off at all, the vessel appears to have been hit by a nuclear M 48 torpedo fired from the  American submarine USS Memphis.

The first explosion was when the micro nuke at the tip of the torpedo  ignited on impact, vaporizing the skin leaving the perfectly round hole  visible in the photographs, then after 135 seconds the secondary  component detonated, setting off Kursk's own defensive nuclear arsenal,  and vaporizing the forward section in an explosion that registered 3.5  on the Richter Scale! 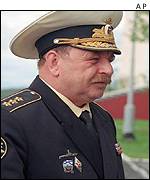 Admiral Popov's sudden departure from the fleet, could have been in  response to him advising the Kremlin he was under nuclear attack,  then being ordered not to retaliate .. Furthermore the story that Kursk was scheduled to carry out a practice  attack on flagship Pyotr Velikiy, like the "front section sawed off" fiction, appears to be the product of a conspiracy involving Vladimir  Putin, Russian Naval Intelligence and the Russian mainstream media, all  intent of perpetuating the official "leaking torpedo fuel," lie!