here is a picture of stalin for you;

perhaps you may use it to strike total fear into the hearts of pravda readers.

Diversionist "Strilok" Urges Women to Fight: Men Do not Come

Russian diversionist Ihor Hyrkyn, also known as "Strelkov", who proclaimed himself a Commander-in-Chief, urged the women of Donbas to sign up for fighting squads.

This was stated by “Strelkov” in a video message on YouTube.

"If the men are not able, we have to call upon women. I have ordered that they be accepted into our army. It is a pity there are no officers among the women, but what difference does it make if male officers do not come to us at all?" he said.

The Russian diversionist complained about the unwillingness of Donbas citizens to fight in such places as Slovyansk, Kramatorsk, Chervonyi Lyman, Kostyantynovka, Horlivka.

"I did not expect that not even a thousand men from the region can be found, ready to risk their life not in their own cities but in the places I just mentioned, where there are shootings each day", he said.

"Strilok" also mentioned that now his forces mainly consist of men older than 40, and many from Donbas regions simply "demanded weapons to protect their homes from crime and criminals."

"Presumably, we have several days left until the low-intensity military actions that are now occurring will turn into battles with dozens and hundreds of killed and wounded," he stated.

“Strelkov” thinks that hundreds of thousands of Donetsk people are just watching the events on TV, "waiting for Russia, with which we share the same blood, to lead its army into Ukraine and do everything on its own."

He urged everyone capable of carrying a weapon and using it "against the people's enemies", to take part in military actions against the Ukrainian army.

Currently, the Ukrainian government is carrying an Anti-Terrorism Operation in the east of the country, where pro-Russian terrorists have invaded state buildings, shot peaceful citizens at checkpoints and have taken hostages.

a new picture of stalin --

Where is a moderator to send that CAPSLOCKER idiot outta Pravda????

Ukro-Army is a silly JOKE! It is not the first time when they fight and kill each other! They do it every night.

I want Ukraine to join NATzO to ruin it.

Ukro-Army is a silly JOKE! It is not the first time when they fight and kill each other! They do it every night.

I want Ukraine to join NATzO to ruin it.

can you find anything in writting for those of us who read.

can you find anything in writting for those of us who read.

More info is here: pictures and video. Official figure of dead is 15 (visible bodies) , but Self Defence say-  in reality the figure is much more higher.

more tomorrow; i must go;

"Unofficial reports" say that ultra-right extremists were responsible for the deaths as they attacked Ukrainian troops who would not shoot on the civilian population. The Kyiv junta denies this [of course]. The conflicting accounts coming from the area need to be carefully analysed so we can separate truth from fiction.

With Donetsk Republic declaring Martial Law and saying that they were most likely going onto the offensive to remove the "occupiers"  there is a probability that casualties [at least some] are caused by the republic forces. 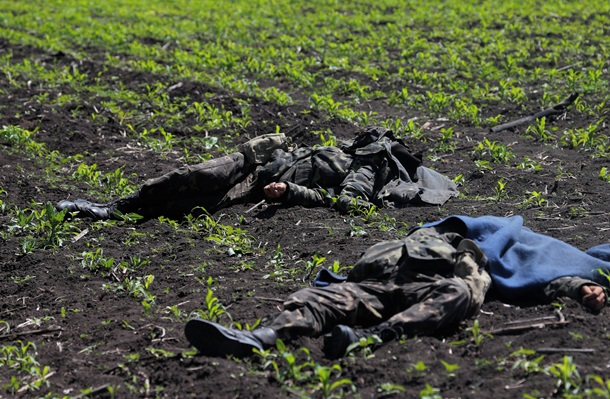 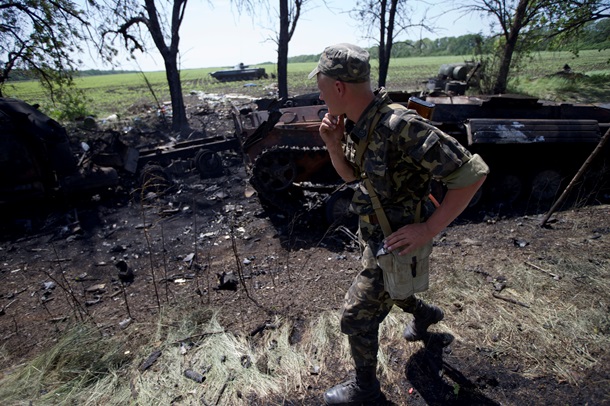 Please stop TRASHING this thread with personal arguments!  Take it to BARDAK.

They sure did give it to those terrorists,  Bravo, big bad fascist shit.

Nemesis, I applaud your support to the republic and the hero of the great patriotic war, but honestly, I find this picture you post the saddest, most moving picture I have seen; on a par with the one of the wee boy dying and the vultures sitting there, just waiting for him to pass away.  Please find another picture to show your support and stop my distress.

Please stop TRASHING this thread with personal arguments!  Take it to BARDAK.

i find your request to be of the most positive intent; primarily because it is not addressed to any one of us in particular.

i have two options;;

-1- is to hear and obey, but to be ready to defend myself whenever the need arises again.

i must defend myself because i am a man and not a prisoner of some sadistic fool.

-2- is to take the time to explain how i was attacked and how i chose to defend myself.

this is the best choice, but it is also of the lest positive intent.

therefore i shall hear and obey; however i shall still not tolerate being attacked by someone who wants to make me into "khakhol" or "smerdukh".

whenever i am attacked again, i shall defend myself with as much ferocity as necessary. although i would certainly prefer to defend russia.

Nemesis, I applaud your support to the republic and the hero of the great patriotic war, but honestly, I find this picture you post the saddest, most moving picture I have seen; on a par with the one of the wee boy dying and the vultures sitting there, just waiting for him to pass away.  Please find another picture to show your support and stop my distress.

i do agree that the constant showing of one comment and picture at the end of each posting can loose its original intent.

each time ( after about twenty times ) i see that same comment and picture i become distressed by the repitition.

and i must add; certainly i must add, choosing a picture of stalin to show withour name, as if it were our own picture, is at least equally distressful.

It's called a signature and at this time I think it reflects the attitude we all should have with regard to this crisis.  Back during the Great Patriotic War all those millions fought and many lost their lives fighting fascism.  Can we now do any less than to fight the reemergence of fascism before it gets any further?

Another civil war working day. Captured ukro-soldiers and body of their nazi-politryk with nazi tatoos.

The time must come when those right sector and other Fascist rabble will have to be engaged and annihilated,there are still at least two Russian Journalists who are being held by God knows who,probably some of those black shirted Fascists.