END TIMES: *** first time *** in History: Russia under "point of no return" type of military attack and government lead by a traitor, fake Putin

16 replies to this topic

Napoleon and Hitler failed. But this time the basic fact is unprecedented: Russia is not lead by a patriot but by a trasonous illumianti agent.
What the illuminati tried several times since the XIV century  and never managed to achieve, is about to finally take place.
This is the first time in History that  Russia  is under military attack and Russia's government is lead by a traitor, the impostor impersonating murdered Putin..
BASICS
http://end-times-his...what-diddo.html

why - i bet that asterix could explain what you are saying with charts and graphs etc.

? how does this fit in with that missing air craft ? Jun 24 -
17,000 Interior police personnel dismissed in Ukraine, while EU IS SENDING A POLICE MISSION TO UKRAINE.
This as
- the nazis continue to bomb the civilians of Slavyansk and dozens of other towns;
- Putin's agents playing resisters, more precisely the infiltrators in the government of Donetsk, stage "ceasefire negotiations" with the nazis.
Goal: let "Putin" officially tell the freedom fighters that they should stop expecting any support from Russia to stop the genocide, from imposing a non-fly zone to any type of weapons.
Notes
interfax newswires archived as of Jun 24 - https://archive.today/9qhBP
** 14:22 FEDERATION COUNCIL ON JUNE 25 WILL CANCEL AT PUTIN'S REQUEST DECREE ON USE OF RUSSIAN ARMY ON TERRITORY OF UKRAINE - DEPUTY HEAD OF FEDERATION COUNCIL INTERNATIONAL AFFAIRS COMMITTEE
** 14:22 UPON SENDING A POLICE MISSION TO UKRAINE, EU SHOULD REALIZE ITS CONSIDERABLE RESPONSIBILITY SHARE FOR SECURITY SITUATION IN THE COUNTRY - RUSSIAN FOREIGN MINISTRY
** 14:26 About 17,000 Interior police personnel dismissed in Ukraine - Interior Ministry

President Vladimir Putin has proposed that the upper house call off the March 1 resolution allowing the head of state to use the armed forces on the territory of Ukraine, said presidential press secretary Dmitry Peskov.

“Because of the beginning of the three-party talks to settle down the situation in the eastern parts of Ukraine, the head of state has addressed to the Federation Council to repeal the resolution on the use of Russian armed forces on the territory of Ukraine,” ITAR-TASS cited Peskov as saying.

The president sent an address to Federation Council Valentina Matvienko today morning, ahead of leaving on official visit to Vienna.

Deputy Head of the Federation Council’s International Committee Andrey Klimov confirmed the upper house will back Putin’s proposal and repeal the resolution on Wednesday, June 25.

The Federation Council’s resolution of March 1 agreed on the president‘s right to use military force on the territory of the neighboring Ukraine “until the normalization of the social and political situation in that country.”

The resolution was adopted following a presidential address demanding security be maintained “for citizens of the Russian Federation, our compatriots and personnel of the Russian contingent deployed in accordance with international agreements on the territory of the Autonomous Crimea Republic of Ukraine.”

The resolution was adopted in accordance of the first part of the Article 102 of the Constitution of the Russian Federation.

On Monday evening, the leader of the self-proclaimed Donetsk People's Republic in eastern Ukraine agreed to a ceasefire in the region until 10am local time on Friday. He stressed that the self-defense force's ceasefire will come only as a reciprocal move.

Earlier, Ukrainian President Petro Poroshenko laid out his plan to deescalate the conflict, announcing a unilateral ceasefire from June 20 until June 27, the day Kiev plans to sign the EU Association agreement. On Sunday he issued a warning, stating that he had an alternative “detailed plan” of regaining control over south-eastern Ukraine, should his current proposal for a truce fail to bring results.

Despite the “unilateral ceasefire” announced by Kiev the fighting in eastern Ukraine continued, and there have been clashes in some areas, the Lugansk People’s Republic said in a statement. It was reported that an artillery shell hit the roof of a kindergarten in Kramatorsk, partly destroying the building. At the same time, self-defense troops of the Donetsk People’s Republic targeted Ukrainian armed forces positions at Karachun Mountain, Itar-Tass reports.

Meanwhile, Commander Strelkov continues to report shelling and firing from the fascist side.

O God Aton of Light, Creator of the human races, King of Wisdom and the One Source of all, we rejoice that your Spirit lives within us.

We forgive ourselves and our fellow men for our complacency in America in allowing this great nation to be over-run with evil. We ask your Spirit within us to forgive us. Many times we have done nothing, while Satan's workers in their attempt to rule the world have taken away the unalienable freedoms you gave to us.

We ask now for the Hosts of Heaven to come and stand against the evil forces. We ask that your Spirit awaken our Earth Shan people to Truth, and that they shall pray for this nation. We ask that all people shall begin right-living according to the Laws of God and Creation. May each individual be empowered to make a strong stand against the "lies" and darkness.

We order now through our God Spirit that all evil forces on Earth Shan be removed and cease to exist forever in Esu (Jesus) Immanuel Sananda's name---that they not hinder any longer our battle for freedom and Truth. We give the Lighted Realms permission to assist us in making this so.

May our original Constitution and our Bill of Rights be so re-established in the Republic of the United States of America.  May the Laws of God and the Creation be established as the Supreme Law of this land.   May we again become "one nation, under God, with liberty and justice for all."  We walk in faith, believing that this shall be done.

Fill this land and our world with your Spirit of Love, and Hope, and Peace, and Joy. This is our prayer to our God-Spirit within us, to God Aton of Light. We pray this in the name of Esu (Jesus) Immanuel    Sananda---and in Heaven's sequence. Not our will, O God, but in all things let Your Will be done. So Be It!

It looks as though the current Putin is not the same man as the one that saved Abkhazia & South Ossetia.

I hope the real Putin was not assassinated.

I hope the current one has a valid way to save Russia.

Despite the bad news, I am hopeful for Russia.

The North Magnetic Pole has left North America, and is rapidly moving to Russia.

The США (USA) National Cathedral was ripped from top to bottom by earthquake;

So I expect that nature's God has a plan for Russia to overcome, even if current Putin is a fake.

Problem is the Reich and their Nazi Puppets in Kiev could see this as weakness,and as we know it just drives them on to further outrages,look at the contrast in the speech Bombama made a few weeks ago when he said the US was exceptional and would take action whenever and wherever in the world it saw fit,he sounded more like Goebbels when he made his total war speech than a Democratic President.

Speaking to reporters in Normandy in remarks televised live on Russian television, Putin said he expects Ukrainian president-elect Petro Poroshenko to show "good will" and "state wisdom." Putin also said that Moscow is ready for constructive discussion with Ukraine on settling its gas debt to Russia.

He said that he and Poroshenko met for 15 minutes to discuss the main issues related to settling the crisis. The leader said he welcomes Poroshenko's position that the bloodshed in eastern Ukraine needs to be stopped.

Poroshenko, speaking to journalists in Normandy, said that he expects a statement from Russia about the recognition of his election, according to the Interfax news agency.

The meeting between Putin and Poroshenko came on the same day that Putin spoke with President Barack Obama, who had been keeping the Russian leader at arm's length over the Ukrainian crisis that has rekindled Cold War-era tensions.

The Kremlin earlier said the two men called for the "soonest end to bloodshed in southeastern Ukraine and combat by both parties, the Ukrainian armed forces and supporters of the federalization of Ukraine," in a statement carried by Russian news wires.

Putin, who was frozen out of G-7 talks Thursday in Brussels, appeared to be moving incrementally back into the fold of the West following his first direct talks with the man elected to lead Ukraine after the previous pro-Kremlin president was ousted in what Putin has called a coup.

* STOP * clicking Malaysia Boeng downed in Ukraine "news": ALL was already said 6 hours later
Why you should stop reading "updates" on these "news"
Because the script is as simple as this:
1- rebels blamed for downing the plane
2- NATO enters the war bombing the rebels.
No airliner was downed. In other words: a story totally staged with actors, same as the Boston Marathon bombings, with the main actors, the Tsarnaev brothers marketed as real terrorists by the same "Putin" who now has again the same main role:
to convince the audience that it's a real event.
BASICS
Previous episode of this series FULLY exposed worldwide only by Last Prophet:
Russia 'agrees to reopen Cuba spy base' theater: nazi agent "Putin" playing his part in setting the stage for NATO officially entering Ukraine.
http://angelic-vladi...y-base-for.html

The traitors are again about to sign a "ceasefire" to save the nazi forces in disarray:
http://armageddon-no...story-only.html
Reminder:
Jun 25, 2014 - Napoleon and Hitler failed. But this time the basic fact is unprecedented:
Russia under "point of no return" military attack and not lead by patriots but by traitors.
http://end-times-his...k-traitors.html
Pushkin's poem from 19th century once again. It was said about Napoleon, the same can be said about Hitler.
But now it's not all of Russia, but only the people of Novorussia who protects the few freedom loving europeans left.
Note
Pushkin's poem from 19th century once again. It was said about Napoleon.
And, frankly, you are hating us.
Why? On the grounds that, on the ashes
Of blazing Moscow, we refused
To buy the power of the brash, who
You trembled underneath, subdued?
Respond: because we sent the idol,
Who’d been predominating kingdoms, to abyss,
Thus having paid with our lifeblood
For Europe’s freedom, state and peace?..
- from "ODE TO DEFAMERS OF RUSSIA (1831)" by Alexander Pushkin 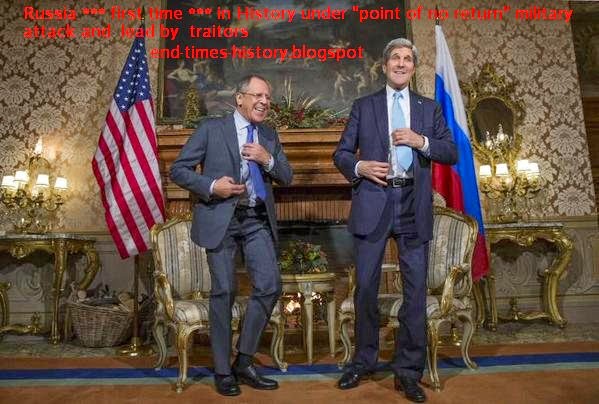 Regarding a sentence from Macaense's good prayer:

"May we again become "one nation, under God, with liberty and justice for all."

We were never "one nation, under God, with liberty and justice for all." But we did give liberty and free speech to the enemies of God and mankind.

Regarding a sentence from Macaense's good prayer:

"May we again become "one nation, under God, with liberty and justice for all."

We were never "one nation, under God, with liberty and justice for all." But we did give liberty and free speech to the enemies of God and mankind.

Who are the enemies you gave free speech to? and who got the "Liberty"?Surely not Vietnam, Afghanistan, Iraq, Philippines?

Minsk 2.0, Feb 2015: Illumiazi Symbolism - nazi agent Lukashenko in the role of openly telling it to the audience at VestiTV:
"Before Merkel the last German leader who was in Belarus was Hitler, and before Hollande - Napoleon."
ALL
Lukashenko, Putin, two of the agents at an all illuminati table "negotiate" the Minsk "ceasefire
http://illuminati-th...nati-minsk.html
The ultimate episode of "all illuminati table negotiating an halt to the war" was staged 1918 at Versailles, packaged as "end of the war".
http://end-times-his...what-diddo.html