Earth's blue beauty glimpsed from far side of the moon

The blue marble that is Earth looks more fragile than ever in this photograph taken by China's Chang'e 5-T1 spacecraft as it rounded the far side of the moon.

Chang'e 5-T1 is doing a tour of the moon to test heat-shield technology for a more advanced mission planned for 2017. The spacecraft launched on 23 October and is scheduled to touch down in Inner Mongolia on 1 November local time.

This stunning image is reminiscent of the iconic Earthrise photo taken by William Anders as the Apollo 8 mission orbited the moon in 1968. Japan's Kaguya probe paid homage to the image in 2007 by capturing HD video of Earth rising above the lunar horizon during its trip.

A perfect high resolution photo, sent from behind the moon from China's Change'e 5-T1 spacecraft ! 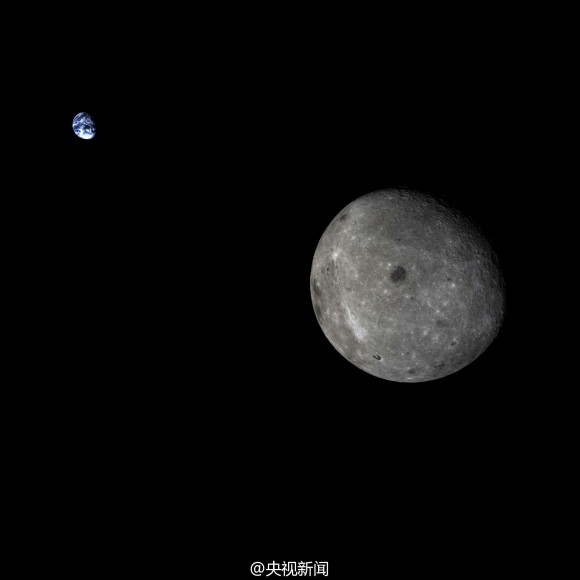 A unique view of the Moon and distant Earth from China’s Chang’e-5 T1 lunar test flight. Image via Xinhua News and UnmannedSpaceflight.com.

The Chinese lunar test mission Chang’e 5T1 has sent back some amazing and unique views of the Moon’s far side, with the Earth joining in for a cameo in the image above. According to the crew at UnmannedSpaceflight.com the images were taken with the spacecraft’s solar array monitoring camera.

Back to PRAVDA Forum en castellano