Charlie Hebdo caricaturists shooting hoax: Why was it staged in Paris? why on Jan 7, 2015?
For a start: to celebrate having just rewritten the start of World War II. What better than, 3 days later, a remake of Hitler's victory march in Paris 1940?

Charlie Hebdo shooting hoax - WHY Jan 7, 2015
Jan 15 201 reads "I,ISIS" in date format, the date illuminati will drop the Shanksville bomb, part of the ongoing remake of 9/11 2001 at Jerusalem.
In other words: black boxes of second missing Malaysia plane will reveal that brave passengers prevented ISIS terrorists from hijacking the plane.
But make no mistake: the main reason for the timing of the "Je suis Charlie" mockery is what happened:
- Jan 6 at Berlin: proclamation of the new "TRUTH" about the start of World War II: Hitler was the victim not the butcher.
- Jan 11 in Paris: crowds finally answer an illuminati call for a march.

Remake of Hitler's 1940 tour of Paris, 75 years later
The celebration of "total victory": this time the treasonous russian gov, represented by foreign minister Lavrov, marchs together with Hiter's younger daughter Angela.
Only a detail: because the detonation of suicide bomber "Obama", alias the launch of the BIG BANG, had to be postponed several times, Hitlery Clinton could not be called on stage to hold her half-sister's Angela hand. 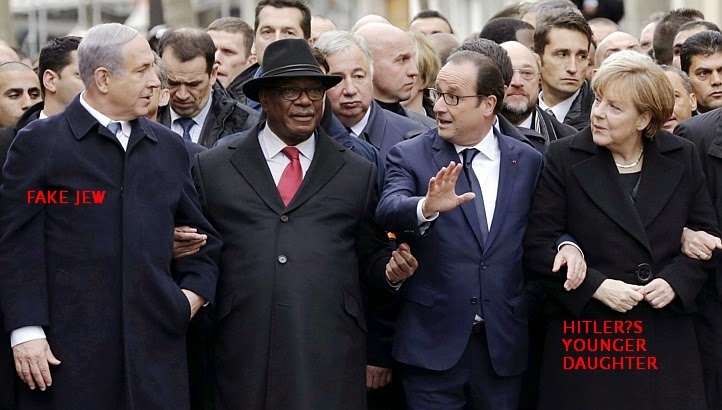 Angela Merkel is daughter of Gretl Braun and half-sister of Hillary Clinton,
They both used to appear in public with their REAL mothers.
http://who-are-the-i...i.blogspot.com/ Vladzo, you're replying to the wrong thread

this reply is to this thread ;;;

you must be corrected.

the old soviet union did not "invade" nazi germany.

the united RED ARMY liberated the nation of germany from the nazi government.

this takes time to explain.

however, the problem is that neither you (mr. marriott) OR;

ataman yatsenuk, or ronald regan, or mad duck mandrake, or many more;

want to understand the proper use of vocabulary.

the fact is that only a neo-nazi would call the allied military actions of world war two - an invasion.

the fact is that only an allied anti-nazi would call it an action of liberation.

How illuminazis use agents "Putin" and Yatsenyuk to rewrite History - Only difference is the audience.
Nov 7, 2014: "Putin" used to set a milestone in the Rewrite History agenda
Russia gov: Soviet Union did not want to fight Hitler.
This is how "Putin" rewrites Stalin's pact with Hitler to gain the time that the soviets needed to arm themselves and so have a chance to resist the inevitable nazi invasion.
Apparently how "Putin" is used while addressing a russian audience is not as extreme as Yatsenyuk, two months later, addressing a german audience.
In fact BOTH rewrite BLACK as WHITE.
Ukraine gov: Soviet Union invaded Hitler's Germany: Berlin Milestone hours before the "Paris shooting" hoax
Jan 2015: Merkel invites Ukraine's prime minister Yatsenyuk to Berlin.
Mission: set a milestone in the Rewrite History agenda, Jan 6, hours before the Paris shooting hoax
Not Germany's chancellor but the Ukraine's prime minister has the role to first proclaim the new "TRUTH":
"Not Hitler but the soviets launched the Second World war".
But make no mistake: the milestone is set at an all german stage, more precisely at the heart of the IV Reich: German state TV ARD and Berlin.
The III Reich's capital that at this point is officially again "only" the capital of Germany.
Notes
Nov 6, 2014
Putin on the pact that the Soviet Union signed with Germany in 1939, carving up eastern Europe:
“Serious research would show those were the methods of foreign policy then,” he said at a meeting with historians.
“The Soviet Union signed a non-aggression agreement with Germany. They say, ‘Oh, how bad,’” Putin said during a meeting of academics.
“But what is so bad about it, if the Soviet Union did not want to fight? What is so bad?”
http://www.bloomberg...-nazi-pact.html
Jan 6 2015
Berlin: german gov welcomes Yatsenyuk. The crowds aren't the same as when Hitler welcomed  Mussolini.
Ukraine's prime minister at Berlin and on german state TV:
1:10 - "We can all very well remember the invasion of Germany by the Soviet Union during the second World War"
BASICS
Continue reading;
Timing for Charlie Hebdo shooting hoax - WHY Jan 7, 2015:
Shanksville remake Jan 15 (part of 9/11 remake at Jerusalem) and remake of Hitler's victory march,  Paris 1940, 4 days after the start of World War II was rewritten.
http://satanic-celeb...ke-charlie.html
1939: Illuminati launch the war to put an end to all wars, In other words: to proclaim Global Slavery.
http://end-times-his...what-diddo.html

Jan 2015 - Rewrite History milestone:
Ukraine's prime minister Yatseniuk: Soviet Union invaded Hitler's Germany: Berlin Milestone hours before the "Paris shooting" hoax. Months later:
Sep 26, 2015 - "Putin" (via his ambassador to Poland) comes as close as it gets to Yatsenyuk, by simply using Poland instead of Russia:
Poles furious after Russia blames them for starting WWII - for dummies
These AP news are still available in the official nazi site stormfront but vanished after a few days or weeks from "serious" illuminazi media, alias ABCNNBCBS, Fox, BBC, ARD, Der Spiegel, Le Monde & Co.
What these headlines illustrate:
- to what lengths the illuminati can go using the impostor impersonating murdered Putin to rewrite History
- one special type of illuminati media "news": to be removed some time after making headlines.
News to be later removed vs theater acts to be later undone:
"Putin invading Crimea" illustrates the latter type. This theater act is meant to divert from 20 million ethnic russians delivered to the openly nazi Kiev regime transporting them to death camps since March 2014.
In the case of Crimea, unlike for "Putin"'s statement blaming Poland for Hitler's crimes: forget about what "Putin" says and look at what the impostor impersonating murdered Putin DOES.
Notes
Sep 26, 2015, AP - Poles furious after Russia blames them for starting WWII
Russian Ambassador to Poland said:"Polish policy led to the disaster in September 1939, because during the 1930s Poland repeatedly blocked the formation of a coalition against Hitlers Germany.
Poland was therefore partly responsible for the disaster which then took place."
https://web.archive....-122545678.html
CONTEXT
How illuminazis use agents "Putin" and Yatsenyuk to rewrite and mock the History of World War II:
2015 Jan: Yatseniuk milestone:
http://rewrite-histo...tarted-war.html
2015 Apr: "Putin"'s "bunch of pimps": a Moscow biker gang as stars of the celebration of 70 years of Hitler's defeat:
http://illuminati-jo...-of-soviet.html
BASICS
Whoever fails to recognize treason has failed, no matter how much of the rest he did get.
Forget about what "Putin" says and look at what the impostor impersonating murdered Putin DOES:
http://angelic-vladi...n-by-deeds.html
Talk of illuminati theater staged to be undone: this act just about to be released:
April 2017 - Brexit undo miracle: scary clowns make it a success: Theresa May calls election: for dummies
http://illuminati-su...lowns-make.html
All in Blog
http://illuminati-me...lames-them.html