" YALTA, February 5. /TASS/. Crimeas resort city of Yalta on Thursday
hosts an international conference focusing on the ways to counter the
cold war ideology and prevent the rebirth of Nazism in Europe.

The event, called Yalta-45: Past, Present, Future, is dedicated to the
70th anniversary of the Yalta Conference, a meeting of the leaders of
the anti-Hitler coalition - Joseph Stalin, US President Franklin Roosevelt
and British Prime Minister Winston Churchill. "

" A lawmaker representing the populist LDPR nationalist party wants to calculate
all damages inflicted by Nazi Germany on Russia during World War II, in order to
slap Berlin with a lawsuit that could amount to 4 trillion. "


" The Russian senators also urge all foreign authorities to actively bring to justice
anyone who publicly denies Holocaust... "

I always wondered about the symbolism of the "frogs."

And now... as of today, they are sitting outside Tsar Nicholas' former Crimea palace !! 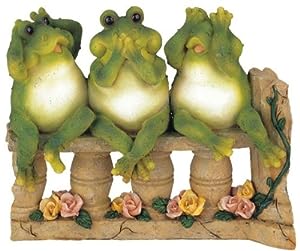 Three frogs sitting on the bench

See no evil
Hear no evil
Speak no evil

I was doing an internet search for more info about this...
and found my own Pravda topic

This is an important subject for me... it symbolizes the
last 70 years of satanic antichrist jew/nwo global rule...
which believe... I HOPE... will soon be destroyed.

It was this subject that brought be back to Pravda forum...
for the last time.