Reminder of Last Prophet's words from 2013:
Napoleon, Lenin and fake Putin: all exposed first by Last Prophet
Illuminati jokes: Napoleon exiled twice to an island for dummies
Napoleon's exile to the island of St. Helena, unlile the exile to the island of Elba, was not originally scripted.
Napoleon was an agent of the prussian illuminati, the same sect that not only introduced the guillotine but also controlled the french revolutiion.
Napoleon was selected to play "emperor of France" to accomplish these two tasks:
1 - to conquer Russia for the illuminati
2 - to immediately after detonate as suicide bomber.
Napoleon's self-detonation would put an end to France's role as key player in Europe, once and for all.
The break-up of France would start by the loss of northeastern areas, Alsace and Lorraine, to be transferred to the prussian illuminazis.
At the end of thed day Napoleon would be rewarded with the "exile in the island of Elba".
1813: Napoleon failed in his first mission. Yet the illuminati, fulfilling one of their religion's commandments, to formally turn defeat into victory, still staged the "Napoleon exiled to Elba" act.
Napoleon's resurrection alias the "escape from Elba" and Waterloo were NOT originally scripted.
They were added to the script for two reasons, the first being to still partly fulfill the second task originally assigned to Napoleon.
The second reason was the same as for Hitler to order Churchill to bomb the hell out of Dresden civilians, 130 years later.
One century later Lenin is an insider remake of Napoleon
Illuminati agent Lenin, an ethnic german pretending to be a russian with some jewish and german ancestry, is assigned the same two tasks as Napoleon.
For the first time the conquest of Russia is done from within, with an infiltrator as treasonous leader.
Detail difference to Napoleon: the self-detonation at the end of the day would obviously be part of the break-up of Russia, not of France.
The plan didn't succed because Lenin died too early and illuminazi agent Trotsky was defeated by patriotic Stalin.
End Times Paradox: Lenin still was awarded the status of a russian hero, sealed with a mausoleum and hundreds of statues in soviet cities.
Two centuries later fake Putin is again an insider remake of Napoleon or in other words a perfect remake of Lenin
Fake Putin became the president of Russia in 2010, after the real Putin was jailed and executed.
Update: The attempt was foiled March 2015, as the impostor was also jailed by patriots.
http://angelic-vladi...deposed-by.html
BASICS
Waterloo 1815 = bombing of Dresden 1945 = illuminati theater AFTER their DEFEAT 1812 and 1943.
http://illuminati-fa...esden-1945.html
Illuminati's failed military attempts to occupy Russia were in fact all lead by Germans, althoug the second one had corsican Napoleon Bonaparte as official leader.
The first as early as 1242,  1242, more than five centuries before Illuminati's self-proclaimed birthdate.
2013, October: Last Prophet exposes worldwide first
Novus ordo seclorum - WHY Illuminati used it to name GLOBAL SLAVERY.
In the process also explsed: the first illuminati failed attempt to militarily occupy Russia, sealed at the Battle of the Ice, 1242.
...
Blog
http://end-times-pro...osed-first.html

And who is the last prophet?

And who is the last prophet?

Tell me Shura, how many Saudis will be alive after the war?

100 KEY events ALL exposed worldwide first by LAST PROPHET -
For a start: exposed first Feb 2010, 65 years to the day
The US and UK air bombings of Germany 1945 followed by the The Marshall Plan 1947 - apparently "Ordo ab Chao" in fact back to the Old Order from controlled Chaos.
Bombing of Dresden 1945: the REAL story
Illuminati Grand Master Adolf Hitler ordered Churchill and Roosevelt to bomb the hell out of the civiian population of historic Dresden and other german cities in February 1945, while not touching the nazi infrastructure.
Agendas include:
- a last desperate attempt to rally Germans behind Hitler, to prevent a popular uprising;
- consequently to postpone the fall of Berlin at the hands of the Red Army for as long as possible.
- the general illuminati agenda "Destruction of churches".
To get the MAIN agenda all you need is to get why did the illuminati stage the battle of Waterloo, 130 years earlier.
Napoleon and Hitler: official leaders of the second and fourth failed military attempts to conquest Russia
Sealed 1812 and 1943 at the battle of Kursk, after illuminati's greatest military defeat ever, months earlier, at the battle of Stalingrad.
Waterloo 1815 = bombing of Dresden 1945 = illuminati theater AFTER their DEFEAT 1812 and 1943.
The first shared agenda is the slaughter of "human cattle", fulfilling one of the commandments of the illuminati religion: 30,000 french soldiers at Waterloo and 25,000 german civilians at Dresden alone.
Waterloo 1815 and bombing of Dresden 1945: same main agenda:
Push the coverup of the previously staged fake war to the limits, once the defeat against the REAL enemy was sealed.
Notes
Destruction of churches:
Dresden city centre ruins, including Prager Strasse, and the same view on 7 February 2015:
http://www.theguardi...-pictures#img-2
BASICS
Napoleon, Lenin and fake Putin: all exposed first by Last Prophet
Napoleon's exile to the island of St. Helens,  Elba, unlile the exile to the island of  Elba, was not originally scripted.
http://end-times-pro...osed-first.html
Marshall Plan, the resurrection of Germany with the largest capital injection  a country ever got from another country: meaning revealed worldwide first
http://das-vierte-re...es-largest.html
Talk of unprecedented air bombings of civilians:
http://illuminati-wo...-iii-spain.html
Destruction of churches agenda - start with current examples carried out by the illuminati puppets playing communist leaders of China:
China: not only churches but also crosses razed to the ground
http://christian-gen...s-razed-to.html

Ides of March and Moscow 1917, 1939, 2015: "Putin" torches Novodevichy monastery
Satanic celebration: Ides of March Moscow 2015: Novodevichy monastery torched by "Putin"
Ides of March 1917, Moscow - Czar Nicholas II Abdicates His Throne.
Czar Nicholas II of Russia signs his abdication papers, ending a 304-year-old royal dynasty and ushering in Bolshevik rule.
He and his family are taken captive.
July 1918: Lenin, an ethnic german executing orders from the Illuminati Grand Master, has Czar Nicholas II executed before a firing squad.
Ides of March 1939 - Germany Occupies Czechoslovakia
Just six months after Czechoslovak leaders ceded the Sudetenland, Nazi troops directly executing orders from the Illuminati Grand Master, Adolf Hitler, seize the provinces of Bohemia and Moravia, effectively wiping Czechoslovakia off the map.
This was the real first step in what was originally scripted as the final illuminazi assault on Moscow.
Ides of March 2015, Moscow, During the illuminati joke "Putin missing", staged March 8 to 18:
Nazi agent impersonating murdered Putin since 2010 torches Novodevichy (New Maidens') monastery, close to Kremlin, again executing orders from the Illuminati Grand Master, Alexander Adolf Hitler, the Fuherer's great nephew.
Fake Putin detonated the incendiary bomb at the monastery's tower.
Goal, in the words of illuminati media, "Live footage led some to believe the Kremlin was on fire".
A parallel script to another bomb, this time figurative, detonated by suicide bomber "Putin" days earlier, again as close to the Kremlin as it gets: the fake death of Boris Nemtsov.
ALL
http://satanic-celeb...ovodevichy.html 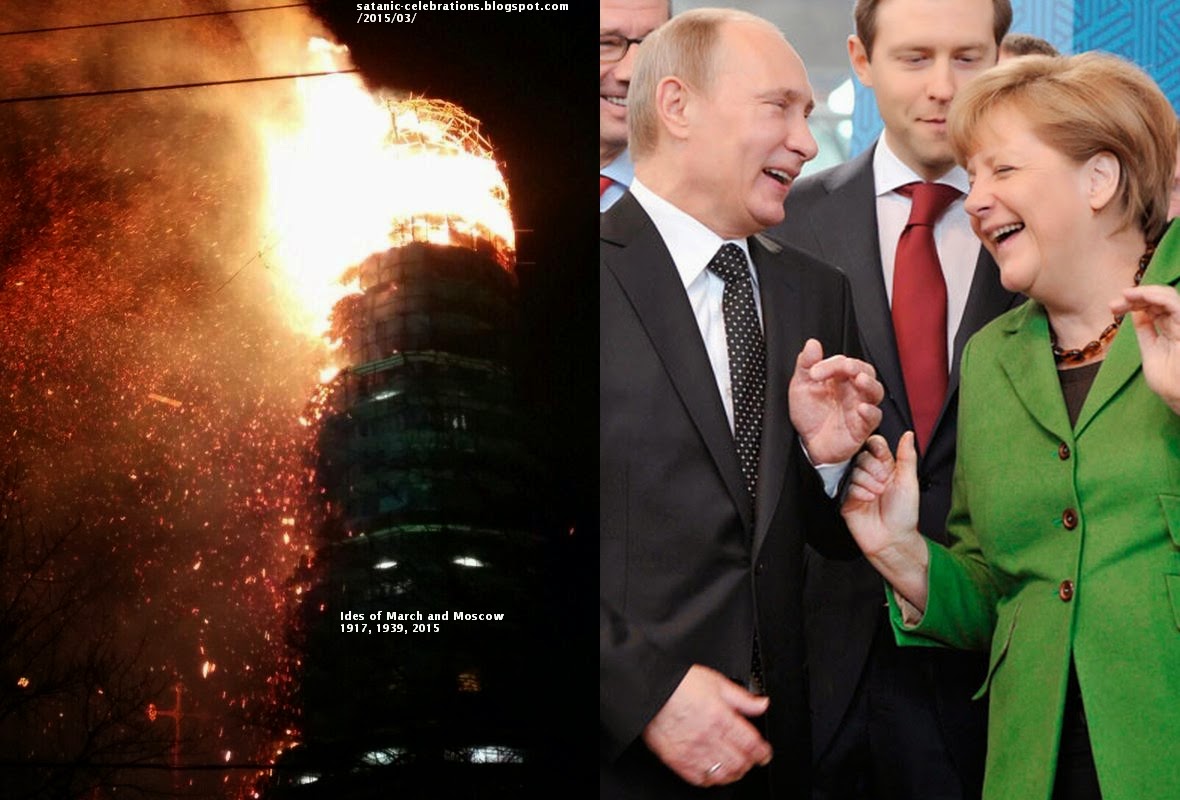