Syria: Idlib first not second provincial capital to be liberated

Syria: Idlib first not second provincial capital to be liberated
The same illuminati media that calls Al-Qaeda extremists to the patriotic freedom fighters of Al-Nusra and Syrian government to the nazi puppets who turned into rubble amost all of Syria and execute not only prisioners (civilians or not) tells us:
"Idlib, a major urban center with a population of around 165,000 people, is the second provincial capital to fall into opposition hands after Raqqa, "
Idlib is not the second but THE FIRST provincial capital to be entirely liberated.
Raqqa continues to be controlled by the nazi puppets. only difference is that they changed uniforms, from Assad to ISIS.
Notes
Illuminati media:
Syrians fled Idlib Sunday, fearing government reprisals a day after opposition fighters and a powerful local al-Qaida affiliate captured the northwestern town.
Idlib, with a population of around 165,000 people, is the second provincial capital to fall to the opposition after Raqqa, which is now a stronghold of the Islamic State group. Its capture by several factions led by the al-Qaida-linked Nusra Front underscores the growing power of extremist groups in Syria, who now control about half the country.
Also in Idlib, activists said members of a Syrian security agency killed more than a dozen detainees before withdrawing from a detention center in the city. The activists said the killings were conducted shortly before rebels took the so-called security compound in Idlib on Saturday.
http://news.yahoo.co...-130440685.html
BASICS
Read this before clicking any more  ISIS "news": Islamic State - the SIX basic facts for dummies
http://war-on-terrro...or-dummies.html

Liberated my arse,those savages have come over the border from Turkey,this carnage will continue as long as the Turks are helping the terrorists,Syria should have taken the war to turkey a long time ago Nato member or not,they could have sent agents on a bombing campaign and kill some of those Turkish Military High command,they need to feel some pain,if the civilians have left the town the Syrians should destroy the place and those animals with it.

Idlib was NOT "liberated."  The maniac US controlled head chopping rats took it over.

Death to the rats!

End Times Paradoxes:
Until total victory liberation of a city means air bombings for all of its civilians
June 10, 2014 Freedom fighters lead by  Ezzat al-Douri, not ISIS liberate Mosul.
June 12, 2014 Iraqi civilians flee Mosul
Illuminati media selling black is white:
Civilians fleeing the coming air bombings rewritten as civilians fleeing ISIS.
What the same illuminati media that calls ISIS to the freedom fighters won't tell: civilians flee because they know that now comes the same as in Fallujah, after it was liberated, Jan 2014:
airforce (either dressed as shia religious fundamentalists or as NATO) dropping barrel bombs over civilians or pretending to hit military targets with missiles while in fact again basically killing elderly, women and children.
Notes
June 12, 2014 - Iraqi civilians flee Mosul
http://www.cnn.com/2...ans-flee-mosul/
April 20, 2015 - Barrel bombs dropped by forces of Syria's President Bashar al-Assad, at al-Thawra neighborhood in Idlib city
http://news.yahoo.co...9547815420.html
BASICS
More End Times Paradoxes and the war in Syria:
fake peace negotiations staged to pass a message meant for everyone except for the people supposedly represented by one of the two parts at the table.
The message, alias "mind control", is based on two psy-op techniques:
- accept the unacceptable: accept someone executing a genocide as a partner at a table.
- destroy logical thinking: you can make peace with someone not only openly announcing (Hitler, see Munich conference 1938) but already openly executing a genocide.
http://end-times-par...gotiations.html 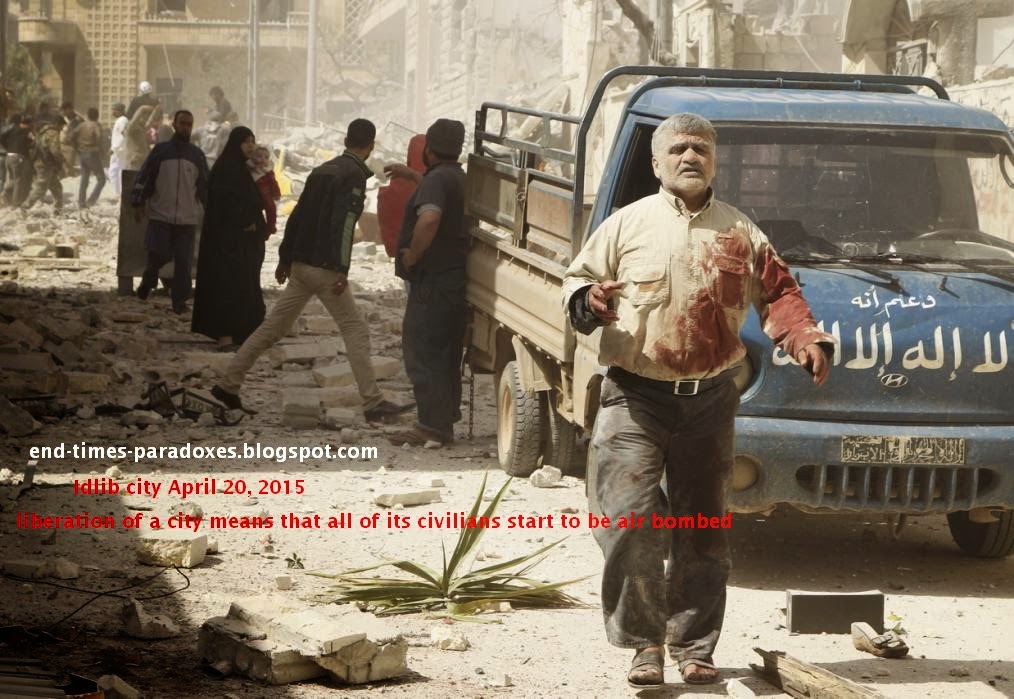 And USA refuses to call ISIS a "terrorist group!!!

According to Iran’s Press TV, several Western governments, including the US, Britain and France, have refused to sign on to a Syrian proposal for the United Nations Security Council to add ISIS to its list of proscribed terrorist groups.

In the UN Security Council’s Al-Qaida Sanctions Committee, the United States, Britain, France, and Jordan have blocked Syria’s request supported by Russia to include the Islamic State (ISIL) terrorist group in the sanctions list as a separate group.

Moscow says that the defunct precursor to ISIS, known as Al-Qaeda in Iraq (AQI), is currently on that list, but that adding ISIS to it is necessary in light of current events in Iraq and Syria. Moscow also said that by not supporting Syria’s proposal to add ISIS to the UN terrorist list, the West is effectively trying to shirk responsibility for supporting that group and delivering it to the doorstep of Bashar al-Assad in Syria.

Moscow is correct in that judgement, but there is a more general issue here that needs to be addressed.

Governments of today believe that they are the ultimate authorities who have some sort of divine right to be the ones that define what does and does not constitute ‘terrorism.’ To be brief, what all of these major governments do is simply label violence they don’t like ‘terrorism’ as a means of delegitimizing it, whilst concurrently condoning violence that they either perpetrate themselves or otherwise support by calling it ‘war’ or an ‘anti-terrorist operation’ or a ‘rebellion against a tyrant’ or some other euphemism for what amounts to violence, murder and terrorism.

Why does anybody give any credibility to regimes who routinely perpetrate and sponsor terrorism when they arrogantly attempt with delusional fervor to pass judgment on ‘terrorists’ that they don’t like? Even the West’s two-faced denunciations of ISIS’s violent extremism is not sincere considering that Western regimes continue to clandestinely sponsor that very group to do its bidding in Syria, Iraq, Lebanon and Yemen, in accordance with Israel’s destabilization doctrine. The moral declarations of vile hypocrites like Obama, Cameron, Hollande, Harper and other Western demagogues is nothing more than putrid political theatre.

Likewise, the Russian regime plays the same game as the West when it comes to terrorism. Moscow has always portrayed violence perpetrated by separatists in the Caucasus as unjustified and illegitimate ‘terrorism'; mindless violence aimed at Russia for no good reason. The retaliatory nature of much of Chechen violence has been dismissed from Moscow’s skewed perspective, while the far worse and markedly more devastating acts of violence by Moscow against Chechnya and its people is underwritten by Russian politicians with a demented hubris.

‘Murderous violence is good and justified when we do it,’ say governments around the world, ‘but when non-state actors do it, it’s terrorism, because only governments have the ‘right’ to use force to achieve political ends.’

The moral of the story is that no major, powerful government on this planet has any moral high ground to condemn the terrorism and violence of others, when they are themselves supremely guilty of such offences to a larger extent than those they accuse.

Shura you're spamming not replying

Shura you're spamming not replying

It is related to the subject, it is not about fishing or guns. ISIS is the mainstay of this tragedy so knowing them is very important. But if you do not want me to post on your stuff I will not.

Syria: Illuminati media reporting the fall of Jisr al-Shughour - for dummies
1. "Syrian government media, quoting an unnamed military official, said troops engaged in fierce battles with the "armed terrorist groups" entering the town, saying they arrived in droves from the Turkish border. The official said the government forces then redeployed to the surrounding villages to avoid civilian casualties.
Assad has blamed Turkey for the fall of Idlib to Islamic fighters, saying Ankara provided "huge support" — logistic and military — that played the key role in the defeat of his forces."
For dummies: Illuminati media diverting from the role of Turkey's treasonous puppet gov, which "supports" the rebels in Syria the same way as Saudi Arabia:
- financing the Iranian shock troops, starting with "Lebanon's army" alias Hezbollhah's militias.
- sending the fake rebels of ISIS to fight and discredit the real rebels.
2. "Syria's civil war, now in its fifth year, has killed some 220,000 people, and wounded at least 1 million. Nearly double that figure are displaced inside Syria because of the conflict." =
For dummies: illuminati media diverting from the genocide carried out by Assad, Iran and the "NATO led coalition", mostly by air bombing civilians with barrel bombs, chemical weapons.
Notes
Apr 25, 2015 - If they can hold the town of Jisr al-Shughour in Idlib province, rebel fighters from Islamic factions — including the al-Qaida-affiliated Nusra Front — likely have cut government supply lines by land leading to the Mediterranean coast and a refuge of embattled President Bashar Assad. The town is one of the last bastions of the Assad's government in the area
http://news.yahoo.co...-094834428.html
April 20, 2015 - Saudi gov, supposedly sunni, financing the genocide of sunnis in plain sight.
Lebanon received the first French weapons in a $3 billion Saudi-funded programme intended to bolster its army to take on jihadist threats, particularly along its border with Syria
http://news.yahoo.co...-064029405.html