Emilio Marcos Palma was the first person born on the Antarctic mainland, at Base Esperanza on 7 January 1978; his parents were sent there along with seven other families by the Argentinean government to determine if family life was suitable on the continent. 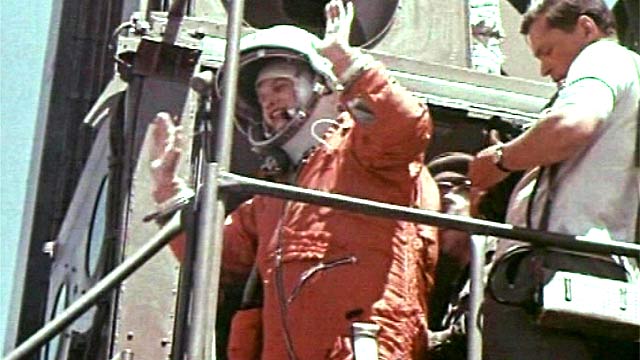 
On the eve of the 40th anniversary of the first flight of Valentina Tereshkova, she denied rumors that her first marriage with cosmonaut Andrian Nikolayev was an "order" of the Politburo. But she confirmed that permission to divorce was personally given by Leonid Brezhnev. Elena Andrianovna as a doctor at a Aeroflot medical center

Chinas first female astronaut has begun training for her next mission after having a baby, state media reported today.

The selection of Chinas female astronauts had been somewhat controversial because of a reported preference for married women who have children, purportedly to guard against radiation damaging their reproductive health. Those fears have so far proven unfounded, although no pregnant woman has flown in space as far as is known.

"Considering that many female astronauts from foreign nations have given birth to children who are quite healthy after completing missions, there should be no concern about a spacewoman's health or fertility."

The official China Daily newspaper quoted Liu Yang as confirming at an award ceremony this week that she had given birth but the report gave no more details about the child.

She was quoted as saying she was training for her next mission, an attempt to dock with a future space station for which no firm date has been set.

Liu, 37, was a member of the three-person Shenzhou 9 mission that flew the first trip to Chinas experimental space station Tiangong 1 in 2012. China plans to launch a more permanent Tiangong 2 space station in about five years. In June 2012, first female taikonaut about to board SZ-9 The satellite, SJ-10, was launched into space on April 6, with 6,000 early-stage mouse embryos so scientists could observe their development in microgravity, which will inform research into human reproduction in space.

Information sent back by the satellite showed that the embryos have developed from cell to blastocyst, the stage where noticeable cell differentiation occurs.

http://news.xinhuane...8950106791n.jpg
Photo provided by the Institute of Zoology, Chinese Academy of Sciences, shows the mouse embryos four hours before they are launched into space by the satellite, SJ-10. Over 6,000 early-stage mouse embryos carried by China's retrievable scientific research satellite have developed in space, making it the world's first-ever successful test on mammal embryo development.

http://news.xinhuane...8950106981n.jpg
Photo provided by the Institute of Zoology, Chinese Academy of Sciences, shows the blastocysts developed from cells 80 hours after the mouse embryos were launched into space by the satellite, SJ-10.


NASA is now hiring astronauts for trips to space and Mars that would blast them with radiation, but Crave's Eric Mack learns that some corners of the world already get a similar treatment.

On Monday, NASA officially opened an application window for the next generation of American astronauts it hopes to send to the International Space Station, lunar orbit and eventually to Mars. But to find the best candidates for dealing with the harsh levels of radiation in space and on the Red Planet, the agency may want to consider looking beyond the borders of the United States for applicants.

One of the biggest challenges in sending astronauts into deep space or setting up a base on Mars is dealing with the radiation from the cosmic rays that our sun and other stars send flying around the universe. Earth's atmosphere and magnetic field deflect the worst of this radiation, but Mars has no substantial magnetic field, which has in turn allowed much of its atmosphere to be lost to space over the millennia.

Spacecraft can be equipped with radioactive shielding to some extent, and a base on Mars could also be constructed essentially underground, using several meters of Martian soil to provide radiation protection on par with Earth's atmosphere (this is what Mars One hopes to do). But when it comes to roaming around the surface of Mars in a spacesuit or in a rover, there's no real practical way for those astronauts to avoid some big doses of radiation in the process.


When I attended the New Worlds conference earlier in 2015, there was a discussion of the challenge that cosmic radiation presents for space exploration, and there were some pretty far-fetched possible solutions, like genetically engineering astronauts in the future to handle more radiation.

But I was more intrigued by one partial solution that was mentioned in passing and only half-seriously -- to consider astronaut candidates who are already used to dealing with more exposure to radiation than most of the rest of us.

For years now, scientists have been studying residents of Ramsar, a town in northern Iran that is believed to have the highest levels of naturally occurring background radiation for an inhabited area. Levels up to 80 times the world average (PDF) have been measured in town, yet studies of the few thousand people living in the area show rates of lung cancer are actually below average. In fact, research shows that a gene responsible for the production of white blood cells and so-called "natural killer cells" that attack tumors was more strongly expressed among the population.


In other words, there may be no need to engage in controversial "editing" of human genetics to create radiation-resistant astronauts because there might already be good prospects in a few corners of the world.

Besides Ramsar, the beaches near Guarapari, Brazil, also exhibit very high levels of natural radiation. People in Yangjiang, China, live with radiation levels three times the world average but have below-average cancer levels, and the story is the same in Karunagappally, India.

Unfortunately, none of the people from these areas would be eligible for the program NASA is now hiring for -- the agency is only looking for American applicants. So who in the United States might be best suited for withstanding the most cosmic radiation?


As it turns out, I think it might be me. According to the US Nuclear Regulatory Commission and the National Radiation Map, Colorado -- where my family has hailed from for generations -- has some of the highest levels of background radiation in the country thanks to the high altitude and naturally occurring radioactive elements working their way up from the Earth.


Today, I'm actually about 50 miles south of the Colorado border, but I'm living at a higher elevation than Denver, and previous reporting has taught me that radon levels are actually quite high in the neighborhood as well.

Unfortunately, I am quite content just writing about space exploration and have no interest in ever leaving this planet myself. (As witness our CraveCast episode, Who wants to die on Mars?) Besides, some of my neighbors -- who have lived with this region's natural radiation for many more generations than my family has -- would probably make better candidates.

So if NASA is unwilling to change its eligibility requirements to consider candidates from northern Iran, perhaps the organization ought to consider sending a recruiter to Taos Pueblo in northern New Mexico instead.

I hate bankster promoted gender role reversal. Chicks should not be sent into space.