No replies to this topic

For seven decades now, the Pax Americana's 20,000 orbital mind-control satellites are known to be masquerading as space junks, in order to con the world's less educated, lower class and with low IQ zombies.

As the Low Earth Orbit satellites will eventually re-enter someday the Earth atmosphere, the Pax Americana is known to use another clumsy trick as a cover-up, presenting these less than stealthy fiery re-entries as Green fireballs!

Note that the greenish hue associated with this fireballs reveals the composition of the material used to build these space particle accelerators.

Green fireballs are a type of unidentified flying object which have been sighted in the sky since the late 1940s. Early sightings primarily occurred in the southwestern United States, particularly in New Mexico. They were once of notable concern to the US government because they were often clustered around sensitive research and military installations, such as Los Alamos and Sandia National Laboratory, then Sandia base.

Meteor expert Dr. Lincoln La Paz headed much of the investigation into the fireballs on behalf of the military. La Paz's conclusion was that the objects displayed too many anomalous characteristics to be a type of meteor and instead were artificial, perhaps secret U.S. spy devices.

Niigata, Japan People in northern Japan saw a rare fireball streak across the sky early Monday.
A Nippon TV weather camera captured video of the fireball. The fiery, greenish object shot across the sky for 15 seconds before vanishing to the northeast.One astronomer said the object was likely a brighter-than-typical meteor, which is technically called a fireball. The astronomer speculated that it could have been caused by space debris such as a satellite fragment burning up as it entered the atmosphere.. 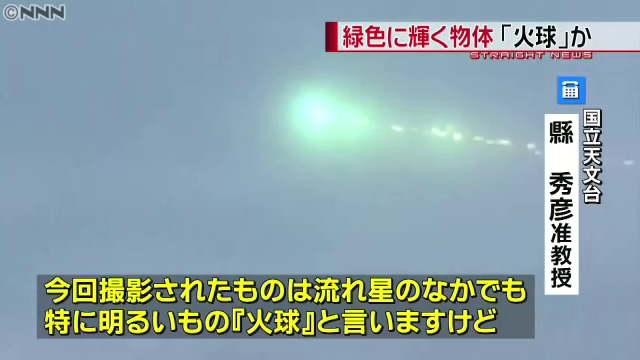 http://ipic.su/7yrRJe.png
Screen capture from video showing trail of debris, consistent with an artificial object reentry like rocket body or satellite. 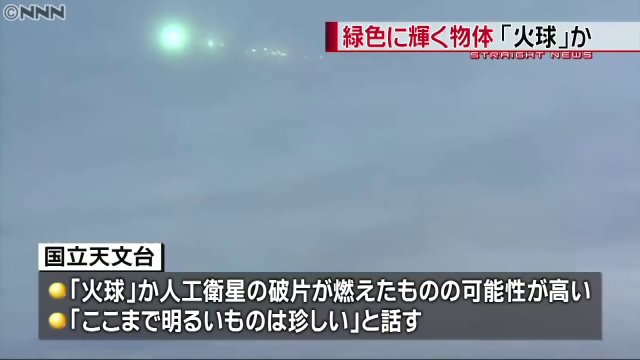 http://ipic.su/7yrRJh.png
Screen capture from video showing trail of debris, consistent with an artificial object reentry like rocket body or satellite.

Not caused by the Ariane 5 reentry: 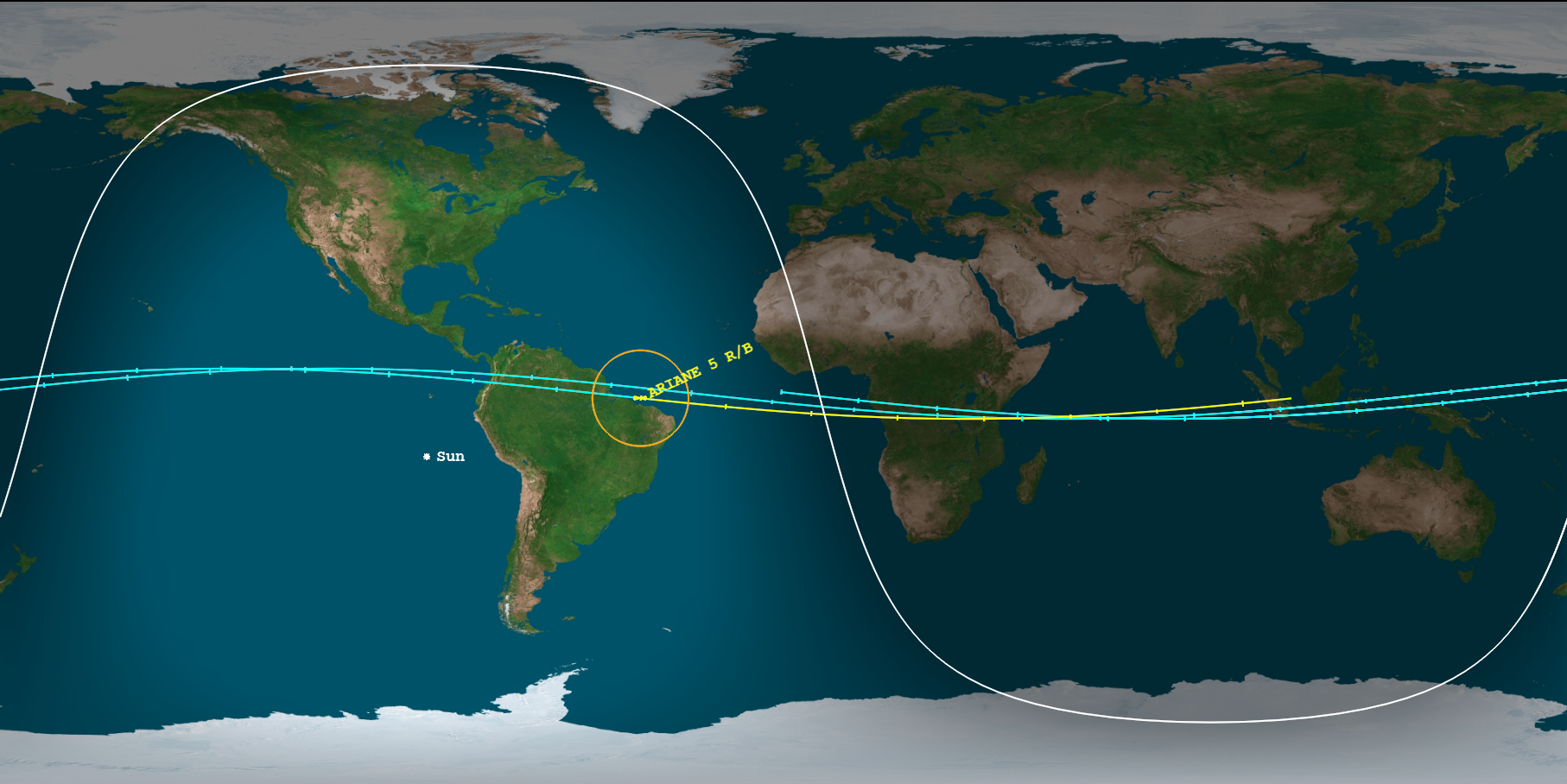 The commander told the Zvezda military-themed television channel that it was common practice to disguise spy satellites as space debris defunct satellites, rocket stages and other fragments of technology sent up into space that still orbit the Earth.

Such satellites can remain inactive in orbit for years before turning on, or "waking up," Maidanovich told the channel's reporter during a tour of Russia's main center for aerospace intelligence in the Moscow region town of Krasnoznamensk.

He added that when his division finds a spy satellite, they report it to the country's leadership for a decision to be made on an international level, but there is currently no talk about destroying them.

Russia's aerospace defense forces monitor daily about 20,000 objects orbiting the planet out of about 100,000 because such objects could have a military purpose, according to the report.

No Secrets: Russia to Publish Catalog Disclosing US Military Satellites

Russia is planning to release to public its catalog of near-Earth objects, including US military satellites, a Russian official said.

Russia will publicly release its own database of Earth orbiting satellites, Viktor Shilin, head of the Russian delegation at the 59th session of the UN Committee on the Peaceful Uses of Outer Space, told the Russian newspaper Izvestia.

The Russian platform would become an analogue to the NORAD (North American Aerospace Defense Command) catalog. It lists over 45,000 tracked objects. Every object has its five-digit number, NORAD ID.

However, in addition to tracking non-military satellites and space debris, the Russian catalog will include data which the United States Space Command does not make public.


"The US wants to preserve its monopoly in regulating space traffic. Moreover, the US military doesnt want make data on its objects public," the source said.


Moscow has repeatedly called for the demilitarization of space.

In 2008, the Russian and Chinese governments proposed an international agreement to prevent the deployment of weapons in outer space but the US government under Presidents George W. Bush and Barack Obama has consistently rejected launching negotiations to conclude such a treaty.

In April, Russian Foreign Minister Sergei Lavrov assured that Russia will not deploy weapons in space.

In late-2015, Russia submitted to the UN General Assembly a draft resolution on space demilitarization. However, the document was blocked by Washington.

Back to Music and Videos Forum