Former Department Of Defense Science Adviser Debunks Claims Of Syrian Chemical Attacks
POSTOL, UNITED, PRESIDENT, WHITE, PIPE, SYRIA, GOVERNMENTS, PHOTOGRAPHS, KILLED, CRATER, POSTOL'S, DROPPED, HOUSE, ATTACKS, CHEMICAL, ASSAD, WEAPONS, U.S., SARIN, GAS, REBEL, SHAYKHUN, EVIDENCE, STATES, SHELL, SHEIKHOUN, GHOUTA, SYRIAN, INSURGENTS, AL-NUSRA, KHAN,
APRIL 18, 2017
As the United States and Western allies march closer to full-scale conflict with Syria, many of their claims are now being scrutinized and dissected by a skeptical public.
On April 4, residents of the town of Khan Shaykhun suffered a chemical gas attack that reportedly killed 74 and injured 557. Despite a lack of evidence or investigation, the United States government, allied governments, and compliant media were quick to point the finger at Syrian President Bashar Al-Assad. The dead stream media ignored the fact that Khan Shaykhun was under the control of Al-Nusra Front, an al-Qaeda linked group which the United States has been funding throughout the Syrian civil war. Instead, the West claimed that Assad launched an air strike which released sarin gas, leading to the deaths and injuries.
Those claims are now being disputed by Theodore Postol, a professor emeritus at the Massachusetts Institute of Technology (MIT) and former scientist with the U.S Department of Defense. In a 14-page report, Postol debunks the White House's report that concluded Assad was behind the attacks.  Postol's report found that the U.S. and supporting governments have not provided any "concrete" evidence to black up their claims. Postol also says that it increasingly likely that the attack was carried out by rebel forces.
"The implication of Postol's analysis is that it was carried out by anti-government insurgents as Khan Sheikhoun is in militant-controlled territory of Syria," reports the International Business Times. Postol writes that he has reviewed the White House document and came to the conclusion "that the document does not provide any evidence whatsoever that the US government has concrete knowledge that the government of Syria was the source of the chemical attack in Khan Sheikhoun, Syria at roughly 6am to 7am on 4 April, 2017."
Postol's claims are based on several arguments. For one, he says the repeated use of chemical attacks by rebel forces over the last few years makes it likely they are the culprits. Also, he examines the main piece of evidence put forth by the White House, namely, photographs which purport to show a crater with an artillery shell that the U.S. says contained the sarin gas.
This conclusion is based on an assumption made by the White House when it cited the source of the sarin release and the photographs of that source. My own assessment is that the source was very likely tampered with or staged, so no serious conclusion could be made from the photographs cited by the White House.
Postol notes that the damage to the shell is not consistent with being dropped from an airplane. However, he believes the damage indicates that an explosive charge was placed on the shell containing the sarin gas and then detonated. "Since the pipe was filled with sarin, which is an incompressible fluid, as the pipe was flattened, the sarin acted on the walls and ends of the pipe causing a crack along the length of the pipe and also the failure of the cap on the back end," Postol wrote.
This is not the first time Postol has spoken against claims of the U.S. government. After the 2013 chemical weapons attack in eastern Ghouta, Postol also stated that the evidence did not point to Syrian President Assad. Postol worked with former UN weapons inspector Richard Lloyd on a report that called into question claims made by the U.S. As Global Research notes,
Just like Ghouta, Idlib (Khan Shaykhun) is dominated by al-Nusra. Earlier this year, even the Washington Post admitted that Idlib's "moderate" rebels had all but been replaced by al-Nusra and other terrorist factions in Syria.
If Western governments and media outlets repeat the mistakes of 2013 by not verifying the claims made by the White Helmets… they may very well end up offering these extremist groups support if they prematurely choose to retaliate against Assad before the dust can settle.
_____________________________________________________________
http://sgtreport.com...emical-attacks/
http://www.activistp...al-attacks.html
http://www.whatreall...hemical-attacks
https://www.sott.net...chemical-attack
https://reclaimourre...-link-to-assad/
https://socioecohist...k-in-syria/amp/
_____________________________________________________________
https://www.youtube.com/watch?v=raMrOjnjwLQ
https://www.youtube.com/watch?v=vZ2uWQTyTug
_____________________________________________________________

I did see this article.

Maybe you can do a rain dance and make a Trump voodoo doll to help.

Russia does not accept the official narrative on Khan Sheikhoun incident, due to the lack of evidence. 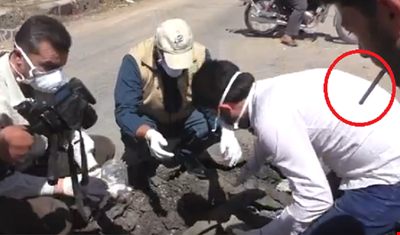 "According to the medicine, whenever a contact with sarin gas is made, the eye pupils get shrunken, not dilated as shown on the photos that are circulating on social media", Shulgin added.

He also drew attention to the hole on one of the photos, shared online by White Helmets and the jihadists, saying "it was obviously not caused by aerial bombardment as it was claimed, but rather by ordinary bombardment, but that some chemicals may have been used."

The diplomat also pointed out that the Western governments want to evade a prompt and thorough investigation, stressing that they likely have some evidence, but deliberately keep it away from the scope of investigation.

On Thursday, a spokesman for the Russian Defense Ministry, Igor Konashenkov, said that not only the narrative about the use of sarin gas in Khan Sheikhoun raises many questions, but that it is also unacceptable for Ahmed Uzumcu, the head of Organization for the Prohibition of Chemical Weapons,  to have a rather biased attitude towards Syria as this delegitimizes the entire organisation.

"The statements, made by Uzumcu, jeopardize the entire organization. Even in the case that Sarin was indeed used, this does not explain the fact how the White Helmets activists were able to move around freely in a Sarin-contaminated area", Konashenkov was heard saying.

Yesterday, the Organization for the Prohibition of Chemical Weapons rejected Russian and Iranian proposals for an independent probe into the Khan Sheikhoun events.

A film, casting doubts on the official mainstream media narrative, was also shown. For instance, on the video footage it was evident that no-one was wearing a mask and there were also plenty of bystanders seen at the alleged scene of attack.

Perhaps the most unusual thing of all is the photo of one of the White Helmets “activists” with a cigarette in his mouth, despite being in a Sarin-contaminated area.

On Tuesday, 4th of April, a town in Syria’s Idleb province was allegedly attack with chemical weapons. Anti-syrian activists and Western governments immediately accused the Syrian government of carrying out the attack, despite having no evidence. The Syrian government has since denied the involvement and the social media hoaxes have also been exposed, however, this did not stop the western governments and their propaganda machine. On Friday, 7th of April, the US forces even carried out a missile strike against Syria in the wake of the alleged chemical attack.

The supplying of weapons, funding, and other support, to armed groups fighting a foreign government is a violation of international law.
Let's not hear the words "international law" come out of Washington in the future.
Especially when the topic moves on to the South China Sea.

Also tagged with one or more of these keywords: SARIN GAS, REBEL, SHAYKHUN