42 replies to this topic

Oil For Gold - Real Or Imagined?
October 29, 2017
By having control of the physical market for gold, China can threaten to use it to destabilize the dollar, without destabilizing the yuan. As such, it is potentially devastating, and used carelessly could trigger an economic collapse in Western capital markets, wreaking financial and economic havoc in America and other advanced nations. China will never be wholly independent from trade with these nations, and severe financial and economic damage to the advanced economies will rebound upon her to some extent. For this reason, she has so far held off using gold as an economic and financial weapon, while she continues to insulate herself from periodic crises in Western economies.   - Alasdair Macleod (Oil For Gold)
In response to questions about when China would finally cast aside the dollar and run the price of gold up, I've always replied that China would be shooting itself in the foot if it tried to replace the dollar too quickly.  Don't forget, China holds about $1.2 trillion in the form of Treasuries. Note: this ratio does not include the market value of its gold holdings, the actual amount of which is unknown outside of a small circle of Chinese officials.
When the idea of a gold-backed yuan-denominated oil futures contract surfaced, it became en vogue for those unable to analyze their way  out of a paper bag to issue commentary refuting the idea.  For some, if an event has not already occurred, they are unable to "see" it.
This article from Alasdair Macleod is a must-read for anyone who wants to understand the path leading up to the ability to convert oil sold in yuan or gold by China's largest oil suppliers.  Judging by the various recent oil trading and gold trading agreements between Russia and China, the conversion of oil sales into gold  may well be already occurring in a two-stage process between Russia and China.
The purpose of this article is to put the proposed oil for yuan contract, which has been planned for some time, into its proper context. It requires knowledge of the history of how China's policy of internationalising the yuan has been developed, and will be brought up to date with an analysis of how the partnership of China and Russia is taking over as the dominant power over the Eurasian land-mass, a story that is now extending to the Middle East. To read the rest click here: Oil For Gold - Macleod
While Alasdair does not overtly acknowledge the idea of a gold-backed oil contract coming from China, I would argue that the article about a gold-yuan oil futures contract  in the Nikkei Asian Review - a highly regarded publication - was likely floated intentionally by the Chinese Government. If you read through Alasdair's article, it's difficult not to come away with the impression that China has been methodically and patiently putting together the pieces to support the ability to convert oil sold China - benchmarked by the yuan - ultimately into gold.
Yes, the fact that China does not currently permit gold to be removed from China in large quantities needs to be addressed.  Analysts using this to refute the oil/yuan/gold notion seem to conveniently overlook the fact that regulations can be revised.  I would suggest that "footprints in the snow" are leading to this eventuality. It's now possible to sell oil to China in dollars or rubles or rials then  convert the proceeds into offshore yuan and buy gold in China's Free Trade Zone.  As Alasdair himself points out:  "Gold futures contracts in yuan are now available to international dealers in Hong Kong and Dubai using the SGE gold price as benchmark."
Furthermore, the Commercial Bank of China (State-owned) is the sponsor of a gold futures contract offered by the London Metals Exchange.  Seems pretty obvious that an oil seller can ultimately convert the proceeds of oil sold to China into gold using three transactions.  Why not consolidate that process into one contract?  I would suggest that a gold-backed yuan-denominated oil futures contract is inevitable.  Just maybe not one the timeline preferred by the western gold investing community.
http://investmentres...the-real-story/

"Our military bases aren't subjugating anyone"
Your Petrodollar is a parasite system on the whole world.
You need troops all over the world to enforce it. Especially near oil.
Parasites go home!

Turkey rejects Rothschilds by ditching dollar and buying up gold
█  █  █  █  █  █  █  █  █
November 16, 2017
Turkey rejects Rothschilds by ditching dollar and buying up gold
Turkey has rejected the corrupt House of Rothschild, as citizens and banks drop the US dollar in favor of gold.
The central bank has sharply ramped up gold buying in recent months, in a move a World Gold Council report calls a 'revolt against the International Monetary Fund.'
According to the report, investments in gold have reached record highs as the people rise up and reject the Rothschild-controlled IMF.
Rt.com reports: "Bar and coin purchases, a measure of investment demand, were 47 metric tons so far in 2017, compared with 14.8 tons in the same period a year ago," ZeroHedge quotes the report as saying.
View image on Twitter
View image on Twitter
GoldInvestingAdvice @Gold_Advice
Turkey Buys 47 Metric Tons of #Gold in 2017 YTD $GLD $TUR
8:20 PM - Nov 14, 2017
1 1 Reply   10 10 Retweets   7 7 likes
Twitter Ads info and privacy
The Turkish central bank has bought almost 30.4 tons of gold this year. The surge in buying is reportedly triggered by state measures aimed at diversifying international reserves in light of rising tensions between Turkey and its traditional Western allies the US and Europe.
A year ago, President Recep Tayyip Erdogan called on the Turkish public to keep savings in gold and avoid the US dollar, urging the central bank to back that policy.
At the same time, the exchange value of the Turkish lira has dropped 15 percent since the beginning of October. The plunge inevitably makes the national currency increasingly unattractive as a savings vehicle.
View image on Twitter
View image on Twitter
London Kapital @londonkapital
Many important data, especially the inflation figures from the US, will be released and the Fed officials will be talking. #Turkishlira continued to decline, while the #dollar started positive for the new week.
1:18 PM - Nov 13, 2017
Replies   1 1 Retweet   2 2 likes
Twitter Ads info and privacy
Most emerging market currencies have been under pressure, but the US-Turkey row, escalated by tit-for-tat travel and visa restrictions, has boosted speculation.
Meanwhile, global demand for gold continues to slump. It dropped nine percent to 915 metric tons in the third quarter of this year, the lowest level since 2009. The decline was reportedly caused by a softer quarter in the jewelry industry, and lower inflows into exchange-traded funds.
█  █  █  █  █  █  █  █  █
http://yournewswire....othschild-gold/
█  █  █  █  █  █  █  █  █

US dollar will lose its ‘kingpin’ status – economist Jim O’Neill 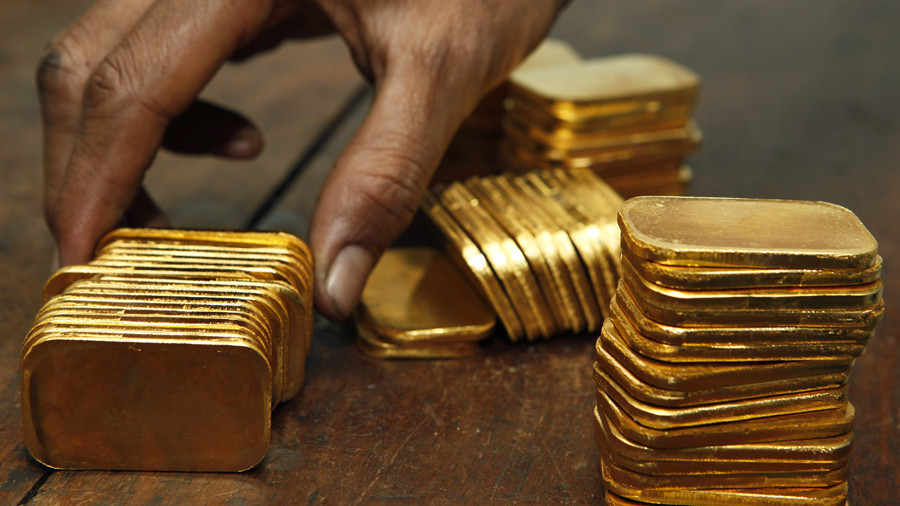 Why should anti-War people care about the Petrodollar?
"America's ability to use the reserve dollar role to finance her wars with other peoples' money"
Perhaps this is part of the reason why America is so enthusiastic about getting into wars?

Why should anti-War people care about the Petrodollar?
"America's ability to use the reserve dollar role to finance her wars with other peoples' money"
Perhaps this is part of the reason why America is so enthusiastic about getting into wars?

Saudi Arabia wants to kill the petrodollar - economist
The United States and Saudi Arabia are so interdependent that a rift would mean disaster for the petrodollar system and the greenback’s reserve currency status, warns economist Brandon Smith. He is sure Riyadh is planning to ditch the dollar.
https://www.rt.com/b...llar-economist/
"ditch that dollar - go for gold"

How Much Longer Can The Petrodollar Survive?

In 1971, Nixon detached gold from the U.S. dollar and the international monetary system.

To maintain demand for a now intrinsically worthless dollar,

the mighty U.S. military was used to demand all international oil sales be paid for in dollars.

"ditch that dollar - go for gold" Geopolitical Tsunami: Pax Americana, Petrodollar, & The Coming Crisis In The Gulf
It's easy to get lost in all things Middle East, especially concerning the chaotic events that unfolded over the weekend in Lebanon and Saudi Arabia.
Three days after the most stunning purge in recent Saudi history - which was really a countercoup, that led to the arrest of dozen of Saudi Arabian royals, ministers and businessmen to further the control of the Kingdom - Saudi Arabia called Yemen's missile launch on Riyadh an 'act of war' by Iran, and also played victim by saying Lebanon has declared war against the Kingdom.
How to make sense of this all?
An author on twitter by the handle Black Pigeon Speaks beautifully outlines today's events in an easy to understand video titled: PAX AMERICANA, PetroDollar & the Coming CRISIS in the GULF…
The author of the video focuses on the Middle East and says a perfect storm is gathering upon the horizon, as the whole world is changing and the only way to change it for the better is to understand the world around you.
The video opens up with a brief understanding of the stunning purge in Saudi Arabia and how it has cleared any potential obstacles for King Salman's son ascension to the throne.
http://www.zerohedge...ing-crisis-gulf
"ditch that dollar - go for gold"