This man promised to reopen the 9/11 investigation

525 replies to this topic

This man promised to reopen the 9/11 investigation
He is not so enthusiastic to do that now he has been told who really did it. 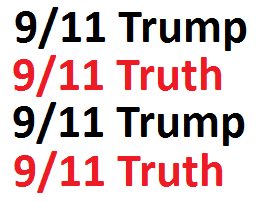 Silverstone made a cool 2B on the job.
Who cares if 50k people/dogs died...?

would have reminded Trump what they did to JFK.....

Roy Cohn was Drumpf's mentor and a faggot. He was on the board of Permindex , the corporation that organised the JFK assassination and the 1962 attempt on the life of Charles De Gaulle.

Drumpf has also gone back on his promise of releasing CIA documents relating to the JFK assassination.

He promised to drain the swamp, but has opened to flood gates and let in even more of those monsters in

Roy Cohn was Drumpf's mentor and a faggot. He was on the board of Permindex , the corporation that organised the JFK assassination and the 1962 attempt on the life of Charles De Gaulle.

HOW STUPID DO THEY THINK THE PEOPLE ARE TO BELIEVE THAT CRAP !!!???

HOW STUPID DO THEY THINK THE PEOPLE ARE TO BELIEVE THAT CRAP !!!???

9/11 Journalist Arrested For Asking Questions About Building 7
13 September 2016.
A group of Florida police officers arrested a 9/11 journalist over the weekend after he conducted interviews asking members of the public how they think Building 7 collapsed.
Bob Tuskin, co-founder of the Free Your Mind conference, interviewed passersby, asking them if they would like to watch a video of a building collapsing.
Activistpost.com reports:
Tuskin's schtick was simple. He would show people a video of a building collapsing in six seconds and then ask them what that looked like to them. Everyone replies the same, saying it looks like controlled demolition. But when Tuskin tells them that this building is Tower 7 and fell on 9/11, he's quickly met with denial, angst, vitriol, ridicule, and now police force.
Below is a video from last year, when Tuskin conducted the same interviews. Notice how the police in this video were actually nice and participated - instead of kidnapping and caging Tuskin.
Apparently, one of the people who became offended after watching Tower 7 fall this weekend called police, who had no problem acting as attack dogs to violate the First Amendment.
As the video shows, when police arrive they demand Tuskin and his crew leave. Tuskin, knowing his rights, immediately and politely refused. This assertion of his rights infuriated the officers.
Tuskin quickly found himself surrounded by Alachua County Sheriff's deputies who were threatening him with arrest if he didn't stop practicing his free speech.
When Tuskin asks the deputies what he's being arrested for, they cannot give him a clear answer, but they continue with the threats. Not wanting to be arrested, Tuskin concedes and begins packing up his things to leave.
However, Lt. Lalonde, with the Alachua County Sheriff's department, did not feel like waiting for Tuskin to leave and quickly moves in to deprive him of his freedom.
While they were placing him in cuffs, the deputies can be heard telling Tuskin to 'stop resisting.' Apparently, it has simply become second nature for officers to repeatedly say this phrase during arrests as Tuskin never resisted.
For practicing his freedom of speech, Bob Tuskin was handcuffed and brought to a holding cell. However, knowing that they had absolutely nothing to charge him with, police were eventually forced to let him go - but not before silencing his freedom of speech.
Tuskin tells the Free Thought Project that as he's being walked to the holding cell by his captors, he asked them why they were doing this and if they thought it was right. He explained to them that this video was going to go on YouTube and be terrible press for police, but they did not care. The deputies candidly stated that they 'are just doing their jobs.'
Lt. Lalonde then said to Tuskin, "you guys are doing conspiracy theory stuff so you should expect this."
Showing the video of Tower 7 collapsing has nothing to do with the realm of conspiracy theory. However, in a society rife with ignorance and corruption, as the video below shows - telling people the truth is now a revolutionary act.
http://yournewswire....out-building-7/
https://yournewswire...out-building-7/

Jews did 9/11 irrefutable proof, Trump will never deliver on that promise because.....

November 2, 2018
9/11 Revisited: Declassified FBI Files Reveal New Details About ‘The Five Israelis’
SEPTEMBER 11, 2015 BY 21WIRE 36 COMMENTS
Editor’s Note: The story of the Dancing Israelis remains one of the most controversial and explosive untold stories of Sept. 11, 2001. Previous efforts to analyze this aspect of 9/11 have been mostly emotive OpEds and conspiratorial rants – until now. Writer Greg Fernandez presents some new declassified FBI material as part of a newly compiled and highly detailed account of this chilling chapter in the 21st century’s most iconic event.
Greg Fernandez Jr.
21st Century Wire
It only took only a few hours for the Twin Towers to fall to the ground on September 11th, 2001.
Later that same day, World Trade Center Building 7 became the third tallest building in the world to implode into its own footprint, allegedly from ‘fire.’ Additionally, to date there is still no evidence that commercial airline Flight 77 struck the Pentagon, even though authorities insist that they have the attack captured on film (but for some reason, they cannot show it to us).
Added to the long list of strange events that happened on September 11th is the infamous story of the five Israeli nationals who were arrested by New Jersey police officers in connection with the WTC attacks on the day. The five suspects were held in detention for three months while the FBI investigated their “jovial” behavior after the North Tower was struck by an aircraft. As the N
https://21stcenturyw...-five-israelis/

It is now illegal to doubt the pancake hypothesis and the magic bullet hypothesis.

And when the glorious peoples leaders yap about how much they love the Home Land of the Pharisees, they are confessing to hating everything else.

It is now illegal to doubt the pancake hypothesis and the magic bullet hypothesis.

And when the glorious peoples leaders yap about how much they love the Home Land of the Pharisees, they are confessing to hating everything else.

Also tagged with one or more of these keywords: 9/11