US Phosphorous War Crimes in Syria

US Phosphorous War Crimes in Syria

October 14, 2018
The United States Did It Again: Its Warplanes Use White Phosphorous Munitions in Syria
The US-led coalition used white phosphorus (WP) munitions while delivering air strikes against the Syrian province of Deir Ez-Zor on Oct. 13.
The attack resulted in civilian casualties.
Last month, WP munitions were also used by two US Air Force (USAF) F-15s in an attack on the town of Hajin in Deir-ez-Zor.
The Syrian government has repeatedly condemned the US-led coalition, which claims that the need to fight ISIS justifies its military actions, while denying the fact it is using white phosphorous projectiles.
WP does not fall under the category of the chemical weapons that are banned by the Chemical Weapons Convention, but it is an incendiary weapon.
As such, it cannot be used against non-combatants.
Protocol III of the Convention on Certain Conventional Weapons "prohibits the use of said incendiary weapons against civilians (already forbidden by the Geneva Conventions) or in civilian areas."
The substance ignites spontaneously upon contact with air, producing a dense white smoke.
The heat can reach 800-900°C.
No water will help. Severe injuries to internal organs could be caused when absorbed through the skin, ingested, or inhaled.
Burning particles of white phosphorus produce thermal and chemical burns if they come into contact with the skin.
And Syria is not the only place where the US has used WP munitions.
White phosphorous artillery shells were used in Iraq during the assault on Fallujah in 2004.
The US admitted that fact.
There have also been media reports about the use of WP in Mosul, Iraq and Raqqa, Syria.
Last year, the Washington Post published photographs of US Marines equipped with white phosphorus projectiles that were to be used in the battle for Raqqa.
The source offered similar pictures showing WP munitions with US Army units outside Iraqi Mosul.
The Human Rights Watch has warned about the dangers of the use of WP in urban areas.
According to Steve Goose, the director of the Human Rights Watch's Arms Division, "No matter how white phosphorus is used, it poses a high risk of horrific and long-lasting harm in crowded cities like Raqqa and Mosul and any other areas with concentrations of civilians."
In 2015, the United States used depleted uranium (DU) in Syria.
DU is not banned by any international treaty but its use is against International Humanitarian Law (IHW).
Article 36 of the Additional Protocol I to the Geneva Conventions requires combatants to ensure that "any new weapon means or method of warfare does not contravene existing rules of international law."
It states, "General principles of the laws of war/IHL prohibit weapons and means or methods of warfare that cause superfluous injury or unnecessary suffering, have indiscriminate effects or cause widespread, long-term and severe damage to the natural environment."
In 2012, the UN General Assembly tried to adopt a resolution restricting the use of DU.
The move was supported by 155 states, with 27 abstaining and four, including the United States, voting against the measure.
The American military has used cluster bombs against civilians in Yemen.
The US is not one of the 102 states that are signatories to the 2008 Convention on Cluster Munitions, which prohibits weapons that open in the air, dispersing multiple bomblets or submunitions over a wide area. Many submunitions fail to explode on initial impact, acting as landmines for years.
CONTINUED AT THIS SITE:
https://www.strategi...s-in-syria.html
https://www.strategic-culture.org/

I am now waiting for the day when the US preach about international law.
It will probably come when the South China Sea is a hot topic.

Shows how deceptive and cruel is USA military still operates under Lincoln's kill the civilians rule:

"extermination, not of soldiers alone, that is the least of the trouble, but the people" .... "We are not fighting against enemy armies, but against an enemy people, both young and old, rich and poor, and they must feel the iron hand of war in the same way as organized armies."

USA's "freedom and democracy" lie in action in Philippines:

Around 1902 in another attempt to "clean" for "world order"
US General Jacob H. Smith tells the commanding officer of the Marines assigned to clean up the island of Samar, Philippines:
"I want no prisoners.
I wish you to kill and burn;

the more you kill and burn the better it will please me."
He orders that the entire island of Samar be converted into a "howling wilderness." He specifically orders that all males over the age of ten are to be shot. Step one is to burn the town of Balangiga to the ground.

Valentine's Day is coming when we celebrate the fire bombing of Dresden, Germany and many other cities.  It's how we USAers show our love. 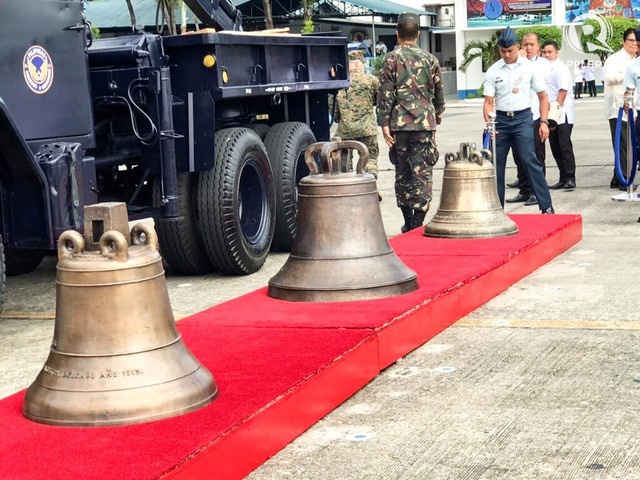 BELLS RETURNED. The Balangiga Bells are unloaded at the Villamor Air Base in Pasay City, its first stop in its historic return to the Philippines after 117 years. Photo by Rambo Talabong/Rappler

"MANILA, Philippines (UPDATED) – After over a century, the Balangiga Bells are finally back home in the Philippines.

The US military plane carrying the historic bells arrived at the Villamor Air Base in Pasay City past 10:30 am on Tuesday, December 11.

Over the decades, the Philippine government had repeatedly asked its ally to return the bells, which were taken by American soldiers from a church in Balangiga town, Eastern Samar, as war booty in 1901.

After President Rodrigo Duterte asked the US to return the 3 bells during his 2017 State of the Nation Address, the US said it would consider the request, and later agreed to give up the bells to forge a stronger friendship with the Philippines.

They're not just bells: Before they were carted off, the bells tolled in the church of Balangiga town. Filipinos rang them in 1901 to signal the start of a surprise attack against American troops during the Philippine-American War.

Armed with machetes, Filipinos killed 48 out of 78 American soldiers in Balangiga, handing the US Army one of its biggest defeats at the time.

The Americans retaliated with a campaign to kill Filipino males over the age of 10 in the town. US military officers ordered their troops to turn Balangiga into a "howling wilderness. Philippine historians estimated that at least 10,000 Filipinos were killed during the retaliatory attack.

What the bells mean: For the Philippines, the bells symbolize Filipinos' courage to stand up to foreign colonizers, while Americans see them as a memorial in honor of their soldiers who were killed at the time.

The US called its act of returning the bells “a demonstration of US commitment to the friendship and partnership, and the alliance” with the Philippines." This is a cover story, because, USA continues its vicious wars against People all over the World.

Maybe, 100 years in future, USA, if it still exists, will give tokens of our "friendship & partnership" to the other nations we have devastated, slaughtered & looted.

Also tagged with one or more of these keywords: War Crime