The Jewish Assassination of Ted Kennedy


51 replies to this topic

Wrong Conclusions But Lists A Lot of the Background

It will never be possible to piece together the real story of Chappaquiddick. Google the subject and you will get a million hits all parroting the fake Jewish narrative. Robert Cutler's 1974 book (self published) is long out of print. Amazon is demanding $350 for what may be the only surviving copy. I am a bit overstretched now and can't order it now. In any case Cutler and other JFK researchers do not permit the discussion of Jewish/Israeli involvement. What we do have now is a new Jewish movie that reinforces the corrupt old myth. The surviving boiler room girls and the others have been sworn to silence. Two of them were Jewish ,still alive and doing well. They may well have been in the plot.

What I plan to do is put forward my own hypothesis. Watch this space.

The map is required background for understanding the whole diabolical frame up. Chappaquiddick was an adjoining island alongside the larger island of Martha's Vineyard on which the Kennedy clan had their family home. To get to the island you had to take a ferry from Edgartown, crossing a 150 metre strait. The Kennedy family had participated in a yacht race at Edgartown for 30 years prior to the sinister black op in 1969. In the 1969 race on July 18 Ted had raced and had come 9th. The race was won by Ross Richards. I have so far been unable to trace Richards after the event. His testimony is crucial in understanding the frame up.

Readers may recall that it was on Martha's Vineyard that the Central Banking Cartel liquidated John Kennedy Jr., bringing down his Piper Saratoga aircraft. The evil neocon John Podhoretz wrote a filthy piece denigrating the family patriarch Joe Kennedy and gloating over the death of his descendants. Anyone doubting the hatred organized Jewry feel for the Kennedy's should read the Podhoretz article. I have posted it elsewhere and it is available on the net.

The Central Banking Cartel had plenty of advance notice. The Kennedy's always competed in the Edgartown regatta. They looked around and planned. There may have been one or more Judases within the group partying at Chappaquiddick. Ted and Mary Jo probably did leave the party at 11:15 pm on July 18. They probably got on to the last ferry for Edgartown and went to their respective hotels. Ted must have gone to bed. The concierge said Ted come to the desk and complained about noise at 2:25 am on the 19th. He was next seen at about 7:00 am by Ross Richards who had won the regatta the previous day. They conversed and Richards said Ted was relaxed. Ted obviously had a peaceful night overall despite the disturbance at 2:25 am. At about 8:00 am Ted's cousin Joe Gargan and a lawyer called Paul Markham arrived soaking wet. They spoke to Ted and Ted became upset. They made some phone calls and then went to report the incident to the local police chief whose surname was Arena. Ted implicated himself  obviously having been threatened with the murder of his children.

The mob and Mossad and the CIA had been busy during the night. They had stolen Ted's 1967 Oldsmobile. They had killed Mary Jo in her hotel room using methods used in the Uwe Barschel or the Hamas  Official assassinations. Remember both the Hamas official and Mary Joe had foam around the mouth. Both had no external injuries. Mary Jo's body was put into the back seat of Ted's car and the car transported to Chappaquiddick on a barge or raft of some kind. The car was driven to the dike bridge. A stuntman could have driven it off the bridge and have been extricated from the car by his expert associates. Alternatively the stuntman could have jumped out as the car gathered speed.

The car after it was pulled out of the water. 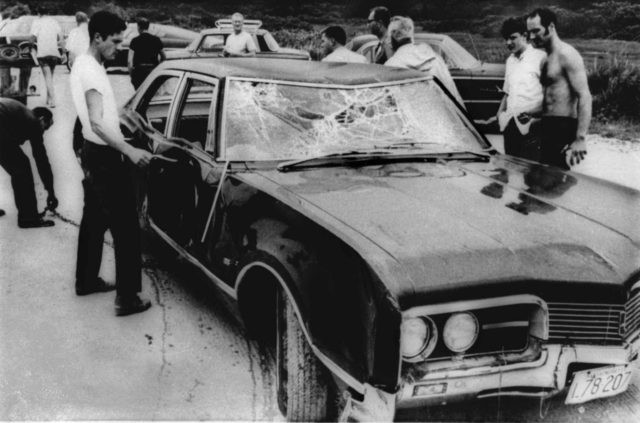 There are already holes in the shattered laminated windshield. A desperate person trapped inside or a rescuer on the outside could easily have punched holes and got through.

Senator Bayh pulled a badly injured Senator Kennedy from the wreckage, but Zimny and Moss were both trapped in the wreckage.  Robert Schauer, who lived about a quarter-mile away from the crash site, was one of the first on the scene and commented about it later to news reporters.

"There was Ted Kennedy laid out flat beside the wreckage of the plane - in deep pain ... but he was more concerned with the comfort of the others.  When I reached the plane," Schauer said. "Senator Bayh was standing beside it trying to gel his wife out. I helped him and we got her free.” "Senator Kennedy said 'See that she's taken care of first.' He was on the ground near the plane. We walked Mrs. Bayh down the hill, her husband and I. We tried to get cars to stop for us, but 10 went by without stopping.”

According to Schauer, "I got them to my house, supplied blankets, called the police and fire departments and went back with some water for Senator Kennedy. When I got back to the plane, Senator Kennedy was still there. He was as cool as a cucumber. He said he had shoulder and back injuries.”

Ted Kennedy was seriously injured in a light aircraft crash in 1964. I am not sure if it was suspicious. His behaviour was exemplary. The filthy Jew media has pilloried him since Chappaquiddick, their own frame up, calling him a coward.

Probably both. The mob could have taken care of the cruder aspects like stealing and disposing of the car. Mossad would have used it's expertise in abducting and /or killing Mary Jo Kopechne. The two organisations have had a cordial relationship. Remember Menachem Begin took refuge with Los Angeles mobster Mickey Cohen after the King David Hotel bombing in Jerusalem. Meyer Lansky took refuge for a while In Israel. Mobster Jimmy Fratianno has described a fundraising party Mickey Cohen arranged for Begin.

The genius of this psyop really is amazing. Organised  Jewry forced Ted Kennedy to lie implicating himself by threatening the lives of his children. They then could use these lies to pillory him for 5 decades and forever into the future. They point out discrepancies in the account but of course steer clear of the foul deeds that easily explain what happened. The new Jewish movie Chappaquiddick reinforces the myths. It has hundreds of millions of goy sheeple asking the wrong questions and smearing the legacy of one of their own.

The fabled fictional detective Sherlock Holmes apparently said that when you eliminate the impossible whatever remains however unlikely is the truth. If only the great detectives of fiction were real !!!

In this case the impossibility is that Ted Kennedy could have had an accident near midnight that killed his passenger , swum 150 metres and appear a few hours later at breakfast cool and relaxed, (testimony of Ross Richards) having neglected to inform the authorities. This is an utter absurd impossibility. Therefore the whole story, concocted by organised Jewry and spoken under threat by the victim, is false.

Around the 6 or 7 minute mark in the video in the preceding post Mae Brussell talks about the framing of Ted Kennedy. Mae Brussell was Jewish and never talks about the Jewish involvement in the assassinations and in this frame up. However she knows about the frame up which is creditable given the absolute ignorance of the dumb goy cattle. Shame on you goyim. I would reccommend watching the video through to the end. It has the interesting information that Dallas chief of police Jesse Curry after his retirement wrote a book on the JFK assassination in which he admits that no one has proved Oswald's guilt or even his presence at the fabled 6th floor window when the shots were fired.

Corrupt media figures say there may have been an air bubble in the car which could have kept Mary Jo alive in the car until she eventually suffocated in agony. A look at the shattered windshield on the photograph in an earlier post prove that this is false. The windshield has gaping holes in it.

This filthy Jew shill has a video of himself parrotting the official Chappaquiddick myth and denigrating Kennedy. This slimeball is allowed to travel freely and disseminate his poison. "Holocaust Deniers" however are denied visas. There are videos of him interviewing Chomsky, that Jewish asset. Both Molyjew and Chomsky deny 9/11 truth.

This incident ruled out a Kennedy presidency for the rest of the century. The Jews killed John Jr three decades later. The other intended side effect: The Kennedy's dare not speak about the assassinations of JFK and RFK. A deaf mute in Dallas wrote to Ted saying he saw gunmen behind the picket fence. Ted wrote back saying he believed the Warren commission. Michael Collins Piper who wrote the book Final Judgement got his bodyguard to offer a copy to Ted when he was in a restaurant. Ted looked at the cover and politely returned it to the bodyguard . Unfortunately Piper makes no mention of Chappaquiddick.