Images Show The Three Gorges Dam Wall is Buckling and "At Risk of Collapse!"


5 replies to this topic

In response to concerns over the dam's safety Cao Yi Director of the Operations Department of the Three Gorges Group Basin Administration, said the Google Maps image in question was not taken directly by a satellite, but had been processed by a series of algorithms which were different from those used by the official Chinese map. TaiwanNews. 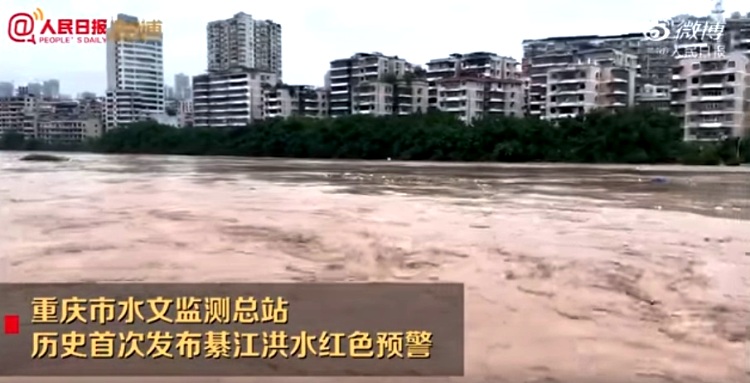 11:50 am June 22, 2020  - The Chongqing Hydrological Monitoring Station has issued the red flood warning for the first time in the history of the Qijiang River, that super historical floods will occur in the next eight hours. China has been hit by continuous heavy rains recently with as many as twenty four provinces affected by flooding, questioning the sound of the dam break of the Three Gorges Dam in the Yangtze River.

Wang Weiluo a well known water conservancy expert in China warned the flood control function of the Three Gorges Dam is useless, that residents in the middle and lower reaches of the Yangtze River should prepare lifesaving equipment and plan escape routes as soon as possible. Once the levee breaks the flood will rush all the way to Shanghai.

The highest water level of the Wucha Station of the Qijiang River in Jiangjin District will exceed the guaranteed water level of 200.51 meters by about 5.7 to 6.3 meters, an increase of about 10 to 11 meters. Call on the villagers to prepare for disaster prevention. Newtalk.tw. 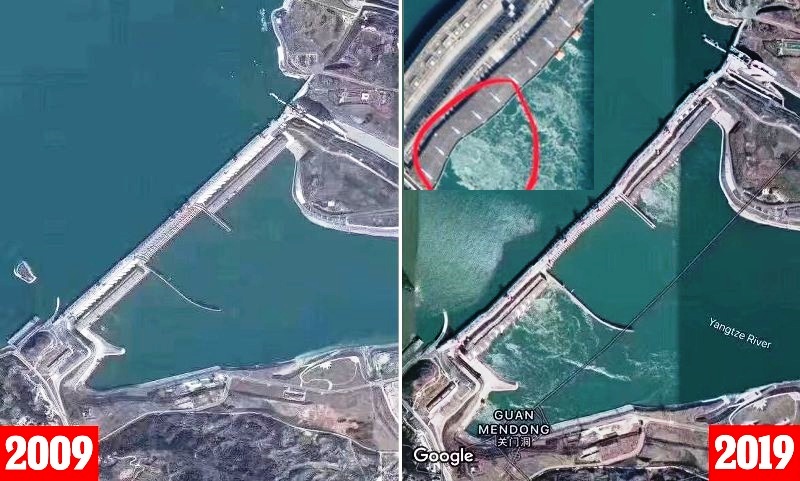 Need to see close up for cracks and shifted cement that would indicate movement.

The dam should be drained immediately and repaired if that's the case. Better now than after it collapses.

Since June heavy rains have caused severe damage in southern China, resulting in 8.52 million population suffering disasters in 24 provinces. In the early morning of June 17, 2020 floods and mud rock flow broke out in the reach upstream of the Three Gorges Dam, and many villages disappeared instantly. Mainland experts issued a warning saying that the people below Yichang should flee quickly.

Hydraulics expert Wang Weiluo said the disaster caused by the Three Gorges Dam will cause 400 to 500 million people in the middle and lower reaches of the Yangtze River have no way to escape, that there is only one way to avoid it that is to demolish the Dam!

At about 3 am on June 17th, Meilonggou, Banshanmen Town, Ganzi Damba County, Sichuan Province, upstream of the Three Gorges Dam, Xiaojinchuan River was blocked by the mud-rock flow to form a dammed lake, and the dam broke out and the river water flooded downstream. Village houses and power stations have been submerged and destroyed.

A villager in Meilonggou said that the landslide occurred at 3 and 4 o’clock in the night. He was awakened by the people in the village and said that the landslides were pouring. After he left, the mudslides buried the village. The film on the scene was startling, a huge torrent was rushing down from the upstream, and some villages disappeared at once wherever it arrived.

A sudden mudslide spewed from the top of the mountain, engulfing and burying many villages. As for how many villagers were killed in their sleep, it is still a mystery. Where the flood had passed, the Zai Jian bridge collapsed instantly in which Sichuan Bazhong City invested 140 million yuan. On June 18 the economist "Financial Cold Eye" tweeted that Sichuan and Chongqing in the upper reaches of the Three Gorges were flooded, small reservoirs broke, and the Three Gorges Dam was in danger! 新紀元 @ YT.

now that a year has passed what is the status

is the damge contained or repaired in full

or waiting for the fate to decide

Could the images have been photoshopped ? I don't think masonry and concrete are that ductile.