40 replies to this topic

For all we know, the real Hitler died in that assassination attempt, and a double took over; And that would explain some of the criticisms of his administration.

After all, there were numerous Ashkenaz in the Nazi Party and German government.

I'd have to agree with Mario on this one....Eva was there only to play her part and to make A.H. look good. I guarantee you that A.H. did not dive bombed her....not even ones!!!

I will believe what I  see and Hear about  Hitler and Eva to be real true love .I can believe he could of been used like we all have been used,I believe we landed on the Moon .I don't  believe that was Hitler sitting in that chair.I  really don't give a damn if he had a little Jew in him,He will remain the Best German in my eyes.I wish we had one like him again.Sorry

You should note how confusing history is for those that do not spend time studying and the fine detail.

So who is Aryan? Aryan means virtuous and by definition the people of Iran are and all the Caucus and more.

Is Michelle Obama a tranny fag?

Sure appears to be,

Normal Humans brains can't even think of such evil as most humans brains are geared toward compssion and empathy...But to the Jew that is a weapon to be used against the Goyim...so they choose sicko blackmailable weirdos as the leaders of a country so they are easily controlled...Do you really think the Epstein Blackmail pedo thing is just a new phenomena?...The Jews have been doing that shit for 2000 years...Why do you think Rome was destroyed in a sea of debauchery and grossness?

https://www.youtube....h?v=qBYLJAToBJM
picture of Adolph on the veranda taken at Berchesgarten Hotel just up the hill from His house.


Hitler died happily of old age in Argentina, after killing his double in the bunker.

https://www.youtube....h?v=qBYLJAToBJM
picture of Adolph on the veranda taken at Berchesgarten Hotel just up the hill from His house.


Hitler died happily of old age in Argentina, after killing his double in the bunker.

And the presstitutes were eager to push the official story. And keep the Jewish conspiracy under cloak.

So, RobertD, what happened with Eva Braun? How come she didn't make it Argentina? How come Goebbels family had to die...little ones and all? And, what about Herman Goering? I mean, they were closest people to A.H. weren't they???

What would happen if America had the original Hitler running things? 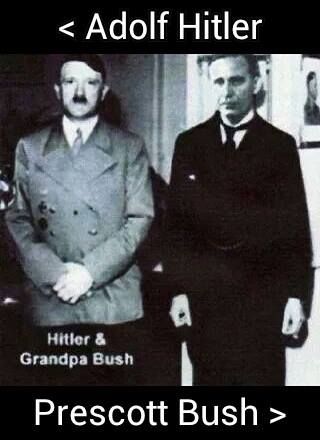 Instead of asking the question "How bad was Hitler?"

We should ask the question "How many rich guys work together during a war, - WITH THE ENEMY - while millions of peasants are slaughtered?'

I don't care how bad Hitler was. If Stalin was worse? But the fact is, the peasants got slaughtered, while the rich got richer

exactly what happened in Iraq, with BoyGeorge Bush.

Hitler died happily of old age in Argentina, after killing his double in the bunker.

For all we know, the real Hitler died in that assassination attempt, and a double took over...

As I have posted here many times in the past... that is my take.

It makes perfect sense Biblically [Hitler = King Josiah] and historically. Hitler lost the war because the majority of Aryan Christendom [including many of Hitler's own German military leaders] were not worthy of him and allied with Edomite-jew-bolsheviks to defeat him.

Previous assassination plots and attempts had failed... many of Hitler's own military leaders joined the plot or remained silent of its existence.

Hitler died from the July 20, 1944 assassination explosion and it was covered up.

The real Hitler was secretly buried [I think I know where] and a double replaced him.

AFTER July 20, 1944... Hitler's double was rarely seen in public and most of the destruction of Germany occurred.

There's more evidence that Hitler escaped rather than shooting himself, which would not be his first option.

Article below suggests an agreement between the US and Hitler to trade scientists for Hitler's freedom.

Some photos appear to be a much older Hitler in Argentina.

He may have wanted the world to know he got away, but only after he had died.

Hitler died happily of old age in Argentina, after killing his double in the bunker.


You red army trolls are WRONG as usual.

You don't understand Hitler's mind and never will.

Hitler was a true believer who was faithful unto death.

Hitler could never retire from his divine calling.

Only a fellow true believer could understand Hitler.

That's why you red army trolls will never have a clue.

Judging from the voice samples of Hitler, I have to conclude that He was earnest as Attossa says.

The Russians defeated Hitler.
The same will happen to anyone else who is stupid enough to attack Russia.


" Pope Francis called for a united Europe in an interview published by Italian daily La Stampa on Friday, saying recent political rhetoric has echoed that of Nazi Germany.

"I am concerned because we hear speeches that resemble those of Hitler in 1934," he said. " 'Us first. We We ' These are frightening thoughts."

The alleged "Pope" is a globalist puppet installed to ease the believers into a world government.

The old Pope who resigned was the true Pope, because that religion required that once a Pope, always a Pope, until death.

As long as the old Pope is still alive, the new alleged "Pope" is a fake.

And as one would expect from a fake "Pope", the doctrine is also fake.

Nationalism is why the Vatican has walls.   It's why the alleged "Pope" has a country to sit in.

The sad thing for me was to be born too late.

I could have been a perfect visionary for Hitler.

Instead, God sent me to Putin !