34 replies to this topic

Angleton was visited on Nov 22 1963 by Colonel George de Lannurien of the French intelligence service SDECE.

Quite a coincidence. That he (de Lannurien) was in Eastern US at that time is confirmed by Phillip de Vosjoli who saw him in NYC at this time. de Vosjoli was the only defector from France to the US. Not Much to Add

It is unfortunate that I have nothing to add. Jerry Kroth seems to be the only one to have taken interest in this fascinating subject. Kroth himself is not an admirer of JFK. Veteran researchers like Jim di Eugenio are missing in action. Possibly because they are limited hangout approved dissidents. Smoking gun ? This is as close as we will get to a smoking gun.

The post above is in French but de Lannurien's career in the SDECE can be discerned. He was in Washington with Angleton on Nov 22, 1963.

On the cover of LIfe. He saw de Lannurien in NYC shortly before the assassination. 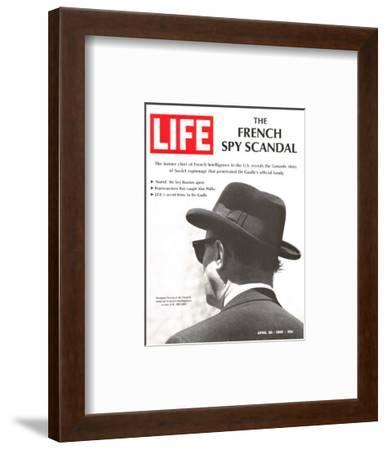 Since I can get no more information on Dinkin and Christensen what I will do is recount some astonishing cases of foreknowledge. The Oxnard call for instance, Rose Cheramie , the Parrot Jungle incident and some others.

A summary of some of the predictions of the assassination

It is quite important to note that Dinkin's and Christenses's intercepts were made about three weeks before the assassination. This was also the time that Ruth Paine found Oswald the job at the School Book Depository. Ruth Paine had CIA connections. She was Oswald's "babysitter" . A well to do middleclass housewife with children of her own she took a great deal of trouble over Oswald and his Russian born wife Marina and their two daughters, having them move into her house in Irving near Dallas. Ruth Paine and her husband Michael did a great deal to frame Oswald in Warren Commission hearings.

It is obvious the plot was finalized in late October/early November 1963. Sam Bloom provided vehicles for the motorcade. Rabbi Silverman, Jack Ruby, Abe Zapruder , the folk at the Jewish owned Daltex building, Honest Joe Goldstein and others must have very busy in those final three weeks. One of them had the motorcade route with it's dangerous dog leg turn at the TSBD published in the local papers to give Oswald a reason to bring his rifle to work on the morning of the 22nd. (There is no real evidence connecting Oswald to the defective Mannlicher Carcano, and he denied owning any rifle during his interrogation).