49 replies to this topic

Another Putin quote: "the mortal danger of the virus persists."

Russian president Vladimir Putin has extended the country's national lockdown until May 11 and warned citizens that they had still not felt the full impact of the coronavirus pandemic.

In a televised speech that marked his most sombre comments on the outbreak so far, Mr Putin said Russia had not yet reached the peak of infections and that "a hard and difficult path lies ahead".

"Ahead of us is a new stage, perhaps the most intense stage of the fight against the epidemic," he said. "The risks of getting infected are at the highest level, and the threat, the mortal danger of the virus persists."

The pandemic has hit Russia economically as lockdowns stymie global and domestic demand alike. Oil prices have collapsed, drastically reducing Moscow's income from crude exports and forcing it to burn through its financial reserves to fill the hole in its budget.

"Of course, I want the inconvenience to end soon," said Mr Putin. "But I will repeat: assuming that the threat has supposedly decreased and is now going to bypass us would be careless and even dangerous."

The stark warning contrasts with some European countries who have moved to gradually ease restrictions and quarantine rules, and came as Russia reported its highest-ever daily increase in Covid-19 cases and deaths from the virus.


Many years ago Pravda had an article about how Putin sometimes speaks symbolically.

I can see symbolism here.

Looks to me that President Putin has been fooled by the epidemic gurus, and liar statistics.

Was He visited by the CIA & Gates' epidemic alarmists?

Since President Putin has allowed Talmudists to infest His Administration, it is a good bet that they are rigging statistics just as they do in USA and other countries.

He must have believed the colleagues and partners about this fake epidemic just as Russia believed them about Libya as just one example.

As for a difficult path ahead,  it is likely due to how mired Russia is in false doctrines from Vatican, Israelis & USA Neo con artists.

It is written, they will get their one world order, for a half hour, then it will all fall apart.

The tree will be violently shaken...

If not, what a colossal waste of a timely once in a millennium global shutdown pandemic !!

Good idea. Guess, I'm doing some dreaming about this.

Good idea. Guess, I'm doing some dreaming about this.


Remember the Bible parable of Esther/Hadassah/Atossa which is an end of the age prophecy based on real historic events in ancient Aryan Persia. Evil Edomite Haman casts lots for the right time to destroy God's Aryan Israel Christ-bearing people. But the tables are turned against Edomite Haman and he and his evil Edomite tribe are the ones who are destroyed !!

Putin is a Jew and a KGB agent. You can't expect better.

Putin is a Jew and a KGB agent. You can't expect better.

You ever heard of the boy who cried wolf ?

So when you also call Putin a jew, who believes you... except your fellow red army trolls.

Putins mommy is a Jew which makes him one 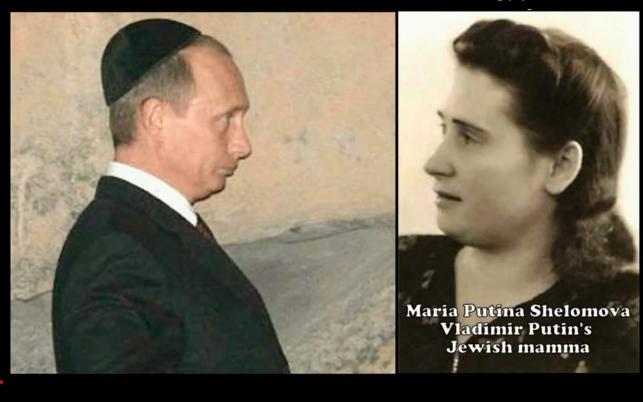 With less Jews there are less Problems .With more Jews more problems and death.

Putins mommy is a Jew which makes him one

at the moment the Jews are bombing Syria all over the place.....Putins response?..Oh look over there coronahoax

at the moment the Jews are bombing Syria all over the place.....Putins response?..Oh look over there coronahoax


Not a word about that on the news.
🤔

Deomcracy = controlled news and lies to get the sheeple to vote for their own destruction.

WW1 "to end all wars" = Germany  broken and Russia broken by Bolsheviks;

WW2 "to make the world safe for democracy" = Destroy a free Christian Germany, bring everyone under "democratic" control.

Destroy the economies of countries like Lebanon and Ukraine. Completely. And make

And take away freedom from everyone - except the extremely rich.

WP1 is the best thing you could ever imagine for Gates and Soros.

Make the middle class poor.
Make the poor - dirt poor
Destroy the economies of countries like Lebanon and Ukraine. Completely. And make
those people slaves forever.
And take away freedom from everyone - except the extremely rich.

WP1 is the best thing you could ever imagine for Gates and Soros.
..


May not turn out the way they want to.