Italian Government Recruits 60,000 Informants to Spy on Neighbors During Lockdown

ROME — The Italian government announced Sunday it is recruiting 60,000 volunteer “civic assistants” as informants to report on anyone violating norms concerning the use of masks and social distancing.

The government is recruiting unemployed citizens, especially those who receive social security or unemployment income, as an extension of its uniformed security services during the second phase of the coronavirus lockdown, Italian media reported.

The plainclothes informants have received instructions to watch for abuses of state-mandated safety norms and to report on violators. The new measure is meant to prevent citizens from being tempted to slack off in compliance with government norms just because no uniformed police are present, since anyone could be an informant.

The deployment of the army of “civic assistants” is reminiscent of measures taken by Italian mayors, such as Rome mayor Virginia Raggi, during the first phase of the lockdown. Ms. Raggi set up a special website where Italians could snitch on their neighbors if they saw them failing to comply with the established norms. The measure met with considerable opposition, with some suggesting that the move typical of the dark days of national fascism.

The new measure was announced Sunday in a joint statement signed by the Minister for Regional Affairs and Autonomies Francesco Boccia and the Mayor of Bari (Puglia), Antonio Decaro, who serves as the President of the National Association of Italian Municipalities.

Mr. Decaro rose to national prominence after a video went viral showing the mayor personally harassing citizens on the streets during phase one of the lockdown. Along with threatening them with police action, the mayor is seen shouting that he is the boss and that all are required to return to their homes.

Sunday’s statement noted the difficulty of controlling citizen compliance with the lockdown norms since they are no longer confined to their own homes but can no visit shops and restaurants.

“We are gradually entering a new normal where there is a gradual recovery of productive activities and citizens are returning to populate cities day after day,” the statement reads. Municipalities “will be able to take advantage of the contribution of ‘civic assistants’ to enforce all the measures put in place to counter and contain the spread of the virus, beginning with social distancing.”

“Now is the time to recruit all those citizens who want to help the country, demonstrating a great civic sense,” it states.

The authorities said that they expect to have their new army of informants ready for deployment by the end of next week.


The evil antichrist Edomite-jew/nwo plans for their draconian "new normal" to the be norm for a long, long time !!

And the Jew World Odor comes along as they promised 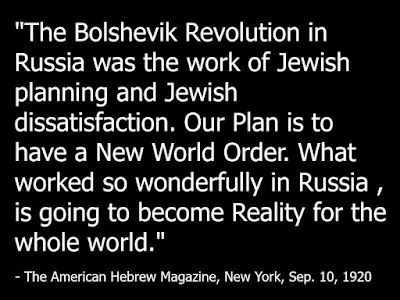 Stalin would be proud.

Stalin would be proud.

There was a spirited speech in the Italian parliament denouncing Gates of Hell and the dystopia he is imposing.

Every time I see the phrase "Gates of Hell", it reminds me that the original meaning of "Babylon" = "Gate of the gods" !

The divine irony is... a gate opens both ways !!

The rich powerful perverted antichrist Edomite-jews and their Babylonian Edomite-jew/nwo already misrule as evil false gods... and now they seek even more evil draconian control over every aspect of life on this planet.

In the Bible, God calls His Aryan Christ-bearing people "gods" because they are the children of God !!

As the parable of Esther [Esther=Hadassah=Atossa] tells us... these are two opposing forces at work here at the end of the age... the evil antichrist Edomite-jew pretenders who have temporarily stolen the crown and now misrule the kingdom [as the evil impostor did in ancient Aryan Persia]... and God's faithful Aryan Christian sons and daughters, the true heirs of God's kingdom on earth !!