Dragon Getting Ready to Fly


36 replies to this topic

# What is happening: SpaceX is expected to launch astronauts Douglas Hurley and Robert Behnken on a mission to the International Space Station at 4:33 pm ET today.

# Why it matters: This will be the first space launch from US soil since 2011.


The SpaceX Falcon 9, with the Crew Dragon spacecraft on top of the rocket, sits on Launch Pad 39-A at Kennedy Space Center in Cape Canaveral, Fla. 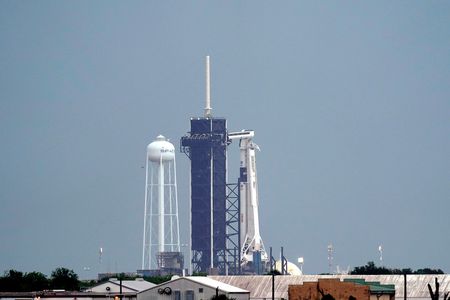 CAPE CANAVERAL, FL - History is about to be made as two NASA astronauts launch into space today, weather pending. Bob Behnken and Doug Hurley will be the first two astronauts to leave earth from U.S. soil in about a decade.

This will also be the first time a private American company, Elon Musk's Space X, will lead the launching of astronauts into orbit.

Liftoff is set for 4:33 p.m. ET from the same spot at Kennedy Space Center where the last space shuttle launched to study the moon in 2011. The SpaceX Crew Dragon will launch on a Falcon 9 rocket on a mission to the International Space station. The astronauts plan to spend four months on board the station.

HOW TO WATCH: NASA will broadcast the launch live on NASA TV. Coverage begins at 12:15 p.m ET. You can watch NASA TV via NASAs website, YouTube, Roku, and Twitch.

There is about a 60% chance todays launch will happen as scheduled because of the threat of unfavorable weather conditions. If the launch if postponed, backup launch days have been set for Saturday, May 30 and Sunday, May 31.

And despite NASA asking people to stay home and watch the launch in order to social distance, cars and RVs have lined the causeway in Cape Canaveral as people try to get a glimpse of the launch pad. President Donald Trump and Vice President Mike Pence are expected to be at Kennedy Space Center for the launch.

Behnken and Hurley are no strangers to space launch. Hurley was the pilot of the last U.S. mission to space in 2011. Each has flown into space twice on shuttle missions, but never on the same mission.

Tax dollars paid for thyat space station. Why does private enterprize get to use it or are they paying a hefty price for the right to use it. And too, how can Private companies built a space ship when thye Government obviously seems unable to get one off the ground any more. If Russia had not taken Americans up for the last decade them America would have no space  crap today.

If Russia had not taken Americans up for the last decade them America would have no space crap today.


The US paid Russia for hitchhiking rides.

That makes the St George/dragon symbolism even more interesting !

So it is apparently humongous news that the USA is just going to lower orbit to the space station......Seems a tad stupid when NASA already claimed they went to the moon using the tech of a casio digital watch in 69.....NASA not only does it look like it has not progressed in 50 years...but gone so far backwards that it is laughable...The more money NASA thieves steal from the tax payer, the less they can travel.....NASA the worst explorers ever in human history

Just watching the live feed you posted from Jew tube Atossa....the Astronots are arriving at the launch site in tesla cars while there was a military humvee just following.....This is comedy....The commentators are like from sesame street...

NASA are retards and comical

Seriuosly this NASA feed is real and not some comedy show?

Is any one else watching this farce?

This is the most retarded fake shit I have ever seen...NASA should not  have suicided Stanley Kubrick to fake this shit.....This crap is even worse than sesame street

Wanna laugh...watch NASA live feed to this retarded shit...The most underwhelming space launch in human history...The Astronots even look like they are just wearing pyjamas with a motor bike helmet....

I can't believe how stupid this is


As I have posted here before... many years ago I asked my brother [42 year career NASA scientist who was one of the pioneer Apollo scientists at the Manned Spacecraft Center in Houston] why NASA stopped going to the moon. He said it was "political" that the "government was now mainly interested in lower space and the Space Shuttle program."

They are going to the space station which is just lower orbit...Why such a huge deal....when Apparently NASA Liars already went to the moon?

Because they never went to the moon...is why this farce is a big deal to NASA lying asshole thieves...

NASA's reason to be so excited that want you to just about orgasm in your pants because the USA haven't gone to space since 2011?.....But what is the excitement that they are just going to the space station in lower orbit when a casio watch got them to land on the moon in 1969?

The most underwhelming space launch ever....But NASA pretend it is the most exciting space travel ever...like what happened to landing on the moon NASA?...this shit is nothing compared to what you claimed you did 50 years ago...I don't get why NASA is so excited about going backwards

"government was now mainly interested in lower space and the Space Shuttle program."

Yeh because NASA have admitted they can't go past lower orbit....NASA are the worst explorers ever...They claim they went to the moon...but then unlike what humanity does is to go a bit further...NASA decided to go backwards and never go to the moon again and only ever go not past where the space station is...a few kilometres, not hundreds of thousands that they lying claimed....

Still watching the NASA tards live feed of the launch...They are just going to the space station which is only a few km's above earth...People have been doing that for years

And to make it even worse...NASA commentators on this live feed have the IQ of a door knob

After NASA's first moon landing, my brother was interviewed [via phone] by Russians [who were also heirs of Hitler's Third Reich scientists/engineers!]

So it was appropriate the first man on the moon was an American of German descent!

So it was appropriate the first man on the moon was an American of German descent!

No one has been to the moon.....The jew media are making out that this launch to the space station is historical...when it has been going on for years....

Just like you believed that total scumbag Grog who was pushing poison vaccines and making you love Jew scum Fauci...You believe the NASA thieves...Your brother needs to come clean with that fake shit of the moon landing

This NASA feed is so insane and retarded....The are interviewing Elon Musk(he doesn't seem very bright)...He said they worked on the space suits for four years so they look good...

Seriously ATossa...You posted the link to this NASA live feed...are you even listening to these morons?

If her brother did actually work for NASA then he was tolf what he was allowed to say and he told Attossa just that. . Marios comment about the commentators having the IQ of a door know is the best comment so far..LOL

Several times my parents and I visited NASA's Manned Spacecraft Center and my brother's lab in the "Lunar Receiving Lab Building" where the astronauts and lunar samples were taken after returning from the moon. I saw all the elaborate quarantine equipment and procedures. My brother showed me a small lunar sample. I am not a planetary geologist... but my 'nuclear geo-chemist' deep space scientist brother is !!

ooooh...how excitement....Airforce One with President is about to land to watch the Astronots about to take off to the space station which has been happening for decades now....Build this crap up to be bigger than what it actually is...Like Coronahoax

If her brother did actually work for NASA then he was tolf what he was allowed to say and he told Attossa just that. . Marios comment about the commentators having the IQ of a door know is the best comment so far..LOL

Yep Atossa's brother was just compartmentalised and told what to believe and he turned Atossa his sister into an idiot as well...poor Atossa...

Are you listening to this live feed from NASA that you posted and  told us to listen to Atossa?

These commentators from NASA and Musk are just stupid and just taking the piss out of us....(it's like a children's show like sesame street the way they are talking to us)...It is the most moronic shit  I have ever listened to