It is going to get much worse ,Get out of the cities white people.

Louis Farrakhan did publish a book detailing the Jewish role in the slave trade. The Jews have obviously suppressed the book. Prof Tony Martin was given hell when he taught the book in his classes.


Tonight FOX news Tucker Carlson had an interesting interview with a older black who apparently likes Farrakhan. No mention of Edomite-jews. But the black man said it's more about class, than race... that upper class [liberal democrat] blacks are a big part of the problem.

Blacks will be Blacks and Jews will be  Jews,We need a cure for these Animals.

Blacks will be Blacks and Jews will be Jews,We need a cure for these Animals.


The Biblical cure for evil perverted antichrist Edomite-jews is HELL !!

Races need to live separately in their own homelands ruled by their own kind as I posted here:

Word is automatic weapons will soon be hitting the streets .

Word is automatic weapons will soon be hitting the streets .

I saw a picture of some antifa (mossad)  with auto weapons...I'll try to find it.......I wonder how many Pentagon paid and trained ISIS rats are in the USA that are back from Syria in Antifa's ranks?

Pallets of bricks are being placed in big and small cities all across the country is anyone looing  at this ?Big money is doing this.

"The Secretary of Defense has authorized US infantry to move into Washington DC."

WE  need the military on every street in America with riots.

"Meanwhile, reports suggest that units from the Armys 82nd Airborne Division have already been activated and sent to the Washington area, along with units from the 10th Mountain Division and 1st Infantry Division."

Those bricks cost at least $1.00 each, so feel free to steal them.

If cops arrest you for stealing weapons used for crimes, you have the "Doctrine of Necessity" defense.

That allows you to neutralize a criminal out of the necessity of defense of property, self, or others.

Someone might be hurt unless you remove the implements of violence.

Besides, bricks make a nice improvement around your home.

Soldiers don't use them.

All that military talk sounds good except for one thing - they send troops into riots with empty guns.

If soldiers are lucky, they get to fix bayonettes, but probably will never be allowed to use them.

The only exceptions are roadblocks.   Those guys have real bullets in their machine guns.

US rioters are the very definition of "useless eaters" that Henry Kissinger was talking about.

They are the babies who, for whatever reason, failed to get aborted by their mothers.

And they seem angry all the time.   The cop killing a black guy is only an excuse to loot.   They would have done it anyway if the crowd was with them.   Even before the cop killing, blacks would join "flash mobs" to loot stores.

Dont tell that to lemondrop.

There is a reason cops become jaded.

Going into gangsta neibourhoods, dealing with the same crap day and night, the rap "culture" that advocates the killing of cops or whites, looters rioters, perpetual anger and pack mentality when they do effect an arrest..

lemondrop don lemon does his putrid soliloquy every night.
" there is something to be said for the diversity he says"

There are very FEW working class middle aged blue collar types, mostly young who for the most part one has to assume have NO clue. Chanting like the same mindnumbing stuff over and over like they actually have some kind of power.

They dont and they will find out when they become that working slob. Highly doubt they do, unless they can sleep on the job during the day.

When will whites get justice for having to pay for this crap.

Cuomo bemoaning the performance of the NYPD, he's another putrid piece of work. Hysteria over ventilators, criticizing the police, on and on.

In a number of different communities in states ranging from California and Texas to Florida - reports have come in that small groups of individuals appear to be canvassing neighborhoods and taking pictures of homes that have police cruisers in the driveways.

"I can absolutely confirm this," told us one police spokesman, who asked that his department be kept anonymous because of the threats. "We've received multiple reports throughout the weekend both in terms of phone calls and alerts that neighborhood residents are putting out on community watch apps."

It comes as police are receiving direct, personal threats through social media, calls and emails.

"We and our children are receiving threats," one police lieutenant told Law Enforcement Today.

The departments we spoke with said that they're currently making policy changes so that take-home police cruisers are either garaged or - for now - left at the police departments. "

WE  need the military on every street in America with riots.

No we don't! Military action is only gonna give them an excuse to use car bombs in retaliation! Citizens need to take care of these pests! I saw a nice sign today...a US flag, a phone number to call and a message....if you don't like this country call this number for free one-way ticket out of here! 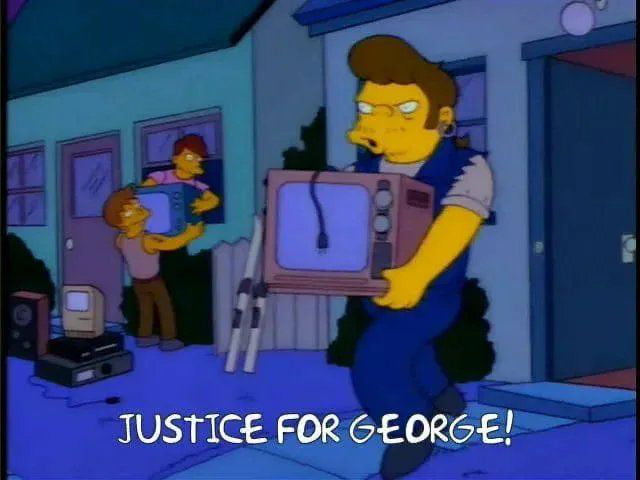 I wonder if the dumbfuck antifa cheese cake thief knows that the display cakes are not  edible?

Trump and Pentagon chief at odds

Despite suggestions from Trump,
Pentagon chief says he does not support
invoking Insurrection Act

" Defense Secretary Mark T. Esper said Wednesday that he does not support invoking the Insurrection Act to take greater government control of the response to civil unrest across the United States, appearing to put him at odds with President Trump."