FOX news just now had a report about White people being fired for not following the Edomite-jew/nwo cultural marxist BLM party line.

A White radio host was fired for saying over the air: "All lives matter"

A White media guy in the UK was fired for tweeting "All lives matter."

A UCLA university professor was suspended [calls for him to be fired] for NOT canceling final exams for blacks so they could protest.

US Soccer repeals rule that banned kneeling during anthem

US Soccer repeals rule that banned kneeling during anthem

The Jews are going all out to destroy civilization in the world ,Satan and evil is loose.

Ironically, right before hordes of black protesters broke quarantine to hit the streets en masse nation-wide [world-wide] over one black man's death... mass media was reporting blacks to be more in danger of dying from Covid-19 !

Here's another irony... after weeks of the DOW going UP... currently the DOW is DOWN over 1600 points! Fox business news said it's due to fear of a summer surge of Covid=19 !

How many have died because of that worthless coon?Jews cover it up.

Here's more interesting info for anyone who has paid attention to all my many posts here about end of the age Luke 17 prophecy. After Jesus' Sodom reference, there is an interesting [but cryptic] verse that says... he who seeks to save his life will lose it. That reminds me of the current "Black Lives Matter" slogan, the current symbolic catalyst that promotes this current insanity and ends HOW? More cryptic verses follow... how one person will be taken and another left. Then the most mysterious verse of all when Jesus' disciples ask Him, taken where? Jesus says: "Where there is a dead body, there the vultures will gather." As I have posted before here... this mysterious verse reminds me Rev 19 [same chapter where God's warrior on the white horse is revealed] when God's angel calls birds of prey to the great super of God... that is. to devour the dead bodies of God's enemies !!

(AP) - Protesters in Minnesota on Wednesday pulled down a statute of Christopher Columbus outside the state Capitol amid continuing anger over the death of George Floyd.

The protesters threw a rope around the 10-foot bronze statue Wednesday afternoon and pulled it off its stone pedestal.

This is Jewish trickery. Columbus (Cristobal Colon) was a crypto Jew as were his funders Luis de Santangel and Raphael Sanchez. Columbus' voyages led to both whites and blacks entering the Americas. 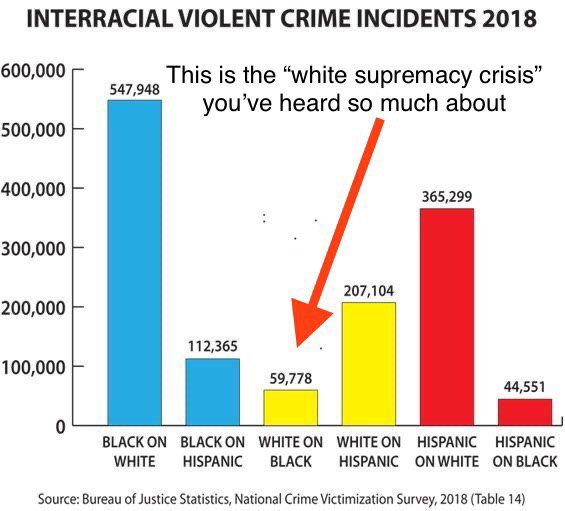 While Instagram has apparently deemed FBI crime stats off limits, Fox News and the Wall Street Journal are now running them on their front pages.

While Instagram has apparently deemed FBI crime stats off limits, Fox News and the Wall Street Journal are now running them on their front pages.

Nationally, efforts to defund the police have been broadly unpopular, with only about 20 percent of Americans favoring reductions in police forces. Citing publicly available data, commentators have asserted that the very idea of systemic racism by police is questionable.

"In 2018, the latest year for which such data have been published, African-Americans made up 53% of known homicide offenders in the U.S. and commit about 60% of robberies, though they are 13% of the population," Heather Mac Donald wrote in The Wall Street Journal this week.

"In 2018 there were 7,407 black homicide victims," she went on. "Assuming a comparable number of victims last year, those nine unarmed black victims of police shootings represent 0.1% of all African-Americans killed in 2019. By contrast, a police officer is 18½ times more likely to be killed by a black male than an unarmed black male is to be killed by a police officer."

Mac Donald continued: "A 2015 Justice Department analysis of the Philadelphia Police Department found that white police officers were less likely than black or Hispanic officers to shoot unarmed black suspects. Research by Harvard economist Roland G. Fryer Jr. also found no evidence of racial discrimination in shootings. Any evidence to the contrary fails to take into account crime rates and civilian behavior before and during interactions with police."

The republican Senate voted with Dems to change names of bases in the South .They stab us in the back.They sell us out on everything.

Americas  top Military are girly men who should be removed .

A nonwhite savage can be taken out of the jungle, given White clothes and a White education... but he will still have [and act on] the genetics of a savage.

The republican Senate voted with Dems to change names of bases in the South .They stab us in the back.They sell us out on everything.

The removal and destruction of these last remaining public White Christian Confederate symbols is a SIGN... a sign of God's final removal of His protection from this reprobate brood of evildoers and their destruction is nigh !!

Americas top Military are girly men who should be removed .


Per Jeremiah, Babylon's warriors are weak and effeminate. They remain inside their strongholds because they are afraid to fight!


The mighty men of Babylon
have ceased fighting,
They stay in the strongholds;
Their strength is exhausted,
They are becoming like women;
Their dwelling places are set on fire,
The bars of her gates are broken.

Gone wirh the wind is now # 1 on amazon.

Gone wirh the wind is now # 1 on amazon.

I bought several "Gone With The Wind" DVDs because I knew it was only a matter of time that movie would be banned. I also bought another back-up DVD player!

You don't see many old movies on TV anymore... not perverted enough, no foul language and too WHITE !!


Conservative British politician and Brexit Party leader Nigel Farage has left his talk show at LBC radio after he made comments comparing the Black Lives Matter supporters to the Taliban.

Farage faced a storm of backlash after tweeting about protesters demonstrating against police brutality and racial discrimination. Protests in the United States over the death of George Floyd, a black man who died while police custody, have spread around the world, including England.

"A new form of the Taliban was born in the UK today," Farage tweeted Sunday. "Unless we get moral leadership quickly our cities won't be worth living in."

"The Nigel Farage Show" began in 2017 and aired five days a week. He often took calls from listeners to discuss current events, Sky News reported. He hosted the show as recently as Wednesday.

LBC confirmed Farage's exit in a Thursday tweet, saying he is stepping down "with immediate effect."

"Nigel Farage's contract with LBC is up very shortly and, following discussions with him, Nigel is stepping down from LBC with immediate effect," the network posted. "We thank Nigel for the enormous contribution he has made to LBC and wish him well."

The remarks from Farage came shortly after protesters in Bristol pulled down a statue of Edward Colston and threw it in the harbor. "

Seattle Police have surrendered the East Precinct to Antifa. The area, known as "CHAZ" (Capitol Hill Autonomous Zone), is now fully occupied by anarchists & they plan on taking more.

The anti-border Leftists who control the six block area are establishing borders & protecting themselves with armed guards.

Regarding the autonomous zone established by the Antifa-led mob, the source - whose anonymity we are protecting - says, "They bar media from entering and screen people coming in. They are walking around fully armed. Talking about making their own currency and making their own flag. SPD is talking about abandoning the west precinct now.

"West precinct has the 911 call centre. This is just like the Occupy movement. Soon we will have feces and drugs everywhere and people getting assaulted and raped in the encampments.

"They've been relocating everything quietly while the focus has been elsewhere. They know that it's only a matter of time before these fools have to direct their issues back on the police. Since yesterday, I haven't seen a single police office or vehicle downtown. Even when they took over city hall, there were no signs of PD at headquarters across the street."

The main concern according to the source is that the SPD West Precinct also houses the city's 911 call centre. There have been reports of sensitive material and equipment being moved out of the West Precinct. Walk-in lobbies of all precincts are shut down as local officials appear to be conceding handing over more of the city as well as police precincts to Antifa.

Police officers were stationed outside of the West Precinct on Wednesday, and two of them provided comment to "The Post Millennial" under the agreement that we conceal their identities.

"Antifa are extorting money and businesses in the Capital Hill Zone for protection money," said one of the officers who was previously stationed at the East Precinct.

"Those running this Capital Hill Zone are employing stop and frisk to anyone who walks through, and shaking down businesses for $500 for protection," added another officer.

Tucker Carlson had a NY nurse on his show today. She said in the hospital she worked, Covid-19 patients were put with uninfected patients and uninfected patients would become infected. But because of "quarantine" patients' friends and relatives were not allowed to see [and advocate] for patients. She said when she asked questions, she was told NOT to ask questions or she will be sent home. She kept asking questions and was sent home.

So basically NY officials purposefully put infected with uninfected in hosptials as well as in nursing homes.

With about half of Americans in the hard Left political spectrum, it doesn't look good for the US or the world, because a revolution in the US would trigger wars elsewhere, such as mainland China vs. Taiwan.   That would be one Hell of a fight.

Other countries also have similar ideas - Iran vs. Israel, another example.