This has escalated the war of words between Trump and Minneapolis Edomite-jew-bolshevik Mayor Frey [who is now giving a news conference.]


Below is Edomite-jew news from last October:

When these stores go up in flames after riots they never return.Another city destroyed by the negro and the jew news never tells the story  of what started the whole thing.He was not a gental  giant.

niggers, jews, bankers, media, most govt etc are the viruses,

The trash needs to be taken out.

I suspect tis was a false flag. Why would the media show graphic images of police brutality ? They hid pig brutality during the lockdown all over the world. This incident could have been staged.

Very clever timing. Now the earth shaking corona false flag is forgotten and the flames  of race hatred are ignited. There will be no more protests and the sheeple will line up for their mandatory mRNA vaccines that will cause them to sicken and die over a couple of generations. The Jewish banksters are far too clever for the sheeple.

their agenda is not news but hysteria and inflammation.

Meanwhile the mayor of Minneapolis blames Trump for the riots. 🤪

I think this is a diversion, fake news to hide real news happening.

I think this is a diversion, fake news to hide real news happening.


It might be a diversion... but there is nothing fake about marxists and black savages rioting, looting, burning and destroying businesses. It has happened repeatedly over many decades, since Aryan Christian sovereignty over North America was destroyed by the evil antichrist Edomite-jew/nwo.

A black business owner who invested his life savings into what is now a looted and destroyed sports bar cried on camera as he lamented, "I don't know what I'm gonna do."

A news report describes how the Minneapolis bar owner was attempting to clean up when thugs tried to break in again during filming and loot his safe.

"I don't know what I'm gonna do, I worked so hard to get here, so hard," the owner says as he cries.


The clip once again emphasizes how rioters are burning down their own community and destroying the lives of other black people, supposedly in pursuit of justice.

In reality, they've trashed their own neighborhood and made it highly unlikely that any new businesses will want to set up shop to serve the community there ever again.

Some business owners placed signs that said "minority owned" in an attempt to deter looters, but that obviously didn't work for this bar owner.


The angel of death is coming for white Americans. Be sure to signal extra hard, shitlibs, so he passes over you. pic.twitter.com/K23xMjDBtU

The angel of death is coming for white Americans. Be sure to signal extra hard, shitlibs, so he passes over you. pic.twitter.com/K23xMjDBtU

God's 'angel of death' gives no warning and no quarter to the the evil perverted antichrist Edomite-jews !!

No doubt this was staged ! 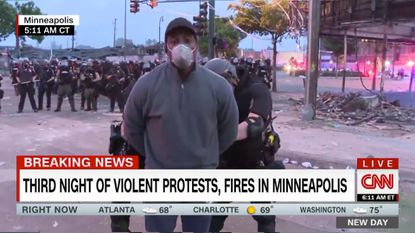 CNN reporter Omar Jimenez, a former Northwestern journalism student and basketball player, was arrested live on-air on May 29, 2020, while covering violent protests in Minneapolis. Jimenez was later released and the governor of Minnesota apologized to the news organization for the state police's actions.(CNN)


(CNN) - A CNN crew was arrested while giving a live television report Friday morning in Minneapolis -- and then released about an hour later - as the crew covered ongoing protests over the death in police custody of George Floyd.

State police detained CNN correspondent Omar Jimenez, his producer and his photojournalist shortly after 5 a.m. CT (6 a.m. ET) as Jimenez was reporting live from a street south of downtown, near where a police precinct building was earlier set ablaze.

Jimenez could be seen holding his CNN badge while reporting, identifying himself as a reporter, and telling the officers the crew would move wherever officers needed them to. An officer gripped his arm as Jimenez talked, then put him in handcuffs.

"We were just getting out of your way when you were advancing through the intersection," Jimenez continued.

Police told the crew they were being detained because they were told to move and didn't, one member of the CNN crew relayed to the network.

Minnesota Gov. Tim Walz told CNN Worldwide President Jeff Zucker that he deeply apologizes for what happened and would work to have the crew released.

Later, after the crew was freed, Walz told reporters: "We have got to ensure that there is a safe spot for journalism to tell the story."

The troopers were clearing the area at Walz's direction, he said, adding there was "absolutely no reason" for the journalists' arrests and that he takes full responsibility. "

more info and photos at link


" In response to the ongoing protests, US President Donald Trump attacked who he called "thugs" in Minneapolis tweets.

Mr Trump claimed there had been "a total lack of leadership" among the city's authorities as the protests intensified, saying he "can't stand back and watch this happen to a great American city".

He wrote: "These thugs are dishonouring the memory of George Floyd, and I won't let that happen. Just spoke to Governor Tim Walz and told him that the military is with him all the way. Any difficulty and we will assume control but, when the looting starts, the shooting starts. Thank you!"

When you allow Jews to run your police forces...Divide and conquer just seems to happen...We are all Palestinians "Terrorists" now

The conference was put on by the Israeli consulate in Chicago, the FBI and Minnetonka police.

"We have a police commander who is speaking from the point of view of the police chief," Arieli said. "And we have a bomb tech specialist who is actually speaking about the techniques and the improvised explosive devices that were used by the terrorists."

He said the conference was put on by the Israeli consulate in Chicago, the FBI and Minnetonka police. This is the second year it has taken place.

"Every year we are bringing top-notch professionals from the Israeli police to share some knowledge and know how about how to deal with the terrorism with our American friends," Arieli said.

Each race should be ruled by its own kind in its own homeland.

After Cyrus conquered evil multi-racial, multi-religion, multi-cultural melting-pot Babylon... he returned Bayblon's diverse captives back to their own homelands, restored their individual identities and placed in power over them leaders from their own people [leaders who were also loyal to Cyrus who was King of kings over all the kingdoms!]

Protesters/rioters are gathering in several major cities...
including at the CNN building in Atlanta


Great balls of fire... I hope they burn down CNN headquarters

Tensions mount as armored vehicles pull up at Atlanta's protest

Tensions mount as thousands of people gather in Atlanta to protest the death of George Floyd.

Protesters can be heard chanting and seen facing a line of police near the CNN building.

Armored vehicles can be seen at the CNN center, and protesters could be seen running in fear of possible tear gas.

For some strange reason...
FOX TV news [NOT CNN TV] is covering that Atlanta protest near the CNN building !

After a march to the Georgia State Capitol, protesters confront police officers after returning to the area around the CNN center in Atlanta, Friday, May 29.

A video from CNN affiliate WGCL showed protesters mounting the CNN sign at the network's headquarters in Atlanta, Georgia, and raising a Black Lives Matter flag.

One protester was seen using spray paint to write #Love on the sign and others were also seen writing on the sign.

Multiple officers responding to protests in Atlanta outside CNN Center

Multiple police vehicles have had their windows broken in front of CNN Center.

Police have been responding to a large crowd of protesters that gathered outside of CNN Friday afternoon and were seen breaking windows of the building and spray painting the CNN sign.

The car fire outside of CNN Center was later extinguished.

There are too many stores looted and burned to count .This shows how helpless the police are in these ties.

Per FOX TV news, there are protests in front of the White House, Capitol and Trump hotel.